US media reaction: ‘They just laid down and took the beating’

Back pages focus on NFL, college football and the final day of baseball’s regular season 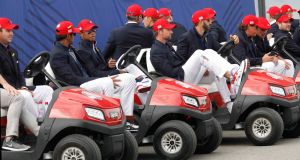 A few hours after the culmination of the Ryder Cup, for readers in America at least, it was as if the tournament had never happened. The story of Europe’s victory didn’t appear among the headlines on Sports Illustrated or ESPN, who concerned themselves with Sunday’s NFL games, college football and the final day of baseball’s regular season. But when the US press did deal with USA’s defeat they acknowledged Europe had been the better team.

“Over three sunlit days at Le Golf National and in front of more than 50,000 spectators, Europe was simply magnifique while the Americans looked listless and were left to wonder why it all falls apart for them when the Ryder Cup is held overseas,” wrote Steve DiMeglio in USA Today.

Sports Illustrated’s Michael Rosenberg agreed, even if he admitted that may not go down well with his countrymen. “You could just say the better team won,” he wrote. “I know. That might not feel very American. It’s easier to blame the coach or scream at a referee or hire a lawyer to file an injunction. But Europe was better. That was the story here at Le Golf National, and maybe we just ought to acknowledge that the winners (by a 17.5-10.5 score!) played some incredible golf.”

CBS Sports’ Kyle Porter said the Americans were still the more talented team, but had simply not performed to the level they can. “In a sport where the margins are thin, these margins are not, and that’s sort of the problem,” he wrote. “The Europeans played about how you would expect a team of their caliber to play in a Ryder Cup. They’re a solid team full of good players. The US players are better by every statistical measure. They represent six of the last seven major winners. Europe doesn’t even have six total major winners on its team. Europe is what we thought they were, but the United States did not rise to the occasion. They didn’t even roll over for the occasion. They just laid down and took the beating.”

Some questioned Jim Furyk’s captaincy, and the New York Times’ Karen Crouse believes old failings haunted the Americans. “In the end, though, the United States lost despite parading out an all-star team that included nine players who have won majors, for the same reason as ever: the Americans are not a band of brothers,” she wrote. “In 2014, after another loss on foreign soil, Phil Mickelson disparaged Tom Watson’s my-way-or-the-highway leadership, leading to a rule-by-committee approach. But the harder the Americans try to manufacture a connection, a cohesion, the more spectacularly they fail.”

The two most famous men on the US team inevitably come up when Team USA’s future is discussed. ESPN’s Kevin Van Valkenburg believes this may be the end of the road for Tiger Woods and Phil Mickelson at the Ryder Cup.

“Because nothing is guaranteed in life or in golf, this week in Paris also might be the end for both men,” he wrote. “And if it is, maybe that’s for the best. . . because everyone knows they weren’t just players – they had a hand in the planning, too. Mickelson wanted the veteran players to have more input, and he stepped on Tom Watson’s neck to get it. It helped them in Hazeltine, and they got plenty of credit. But when it goes bad, as it did this week, you have to own that, too.”

Van Valkenburg’s ESPN colleague Bob Harig prefers to reflect on a positive – the fact that Woods played in the first place. “Woods deserves a bigger picture view,” he wrote. “After all he endured to get back here, and after the success he had along the way, the Ryder Cup pain is undeniable. So are the bodily aches he has endured along the way. But it will pass in time, and just getting here will be celebrated, even if the result will not.”