‘For somebody as successful in the Ryder Cup as I am, I don’t think it’s smart to sit me twice’ 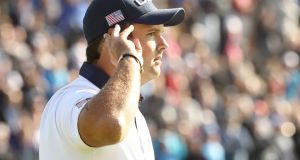 Tommy Fleetwood sat at one end of the dais on Sunday night and blew kisses across the table to Francesco Molinari, who emerged, with Fleetwood’s help, as the leading man in Europe’s Ryder Cup victory against the United States. Molinari, who sealed his 5-0 record with a 4-and-2 victory against Phil Mickelson in the singles round, was fielding a question about becoming a folk hero after following his victory in July’s British Open with his star turn here.

Molinari, whose expressionless manner was made fun of in a precompetition team video, said with his usual poker face in place that statistically, he stood “a good chance of winning some points.”

Before he could continue, Fleetwood leaned into his microphone and said: “You’re so arrogant. Get over yourself.”

Led by Fleetwood, the European players all had a good chuckle, and not just because Molinari is about as modest as major winners come. The group of players that carved out a 17½-10½ victory at Le Golf National truly seemed to enjoy one another’s company.

A connection seeded in a social media group chat several weeks ago blossomed into a camaraderie that the Irishman Rory McIlroy credited with the team’s success. Because of how well they all got along, he said, the players could be mixed and matched like interchangeable parts in the foursomes and four-ball matches, where they built a 10-6 lead in the first two days.

“It gave us a lot of options,” McIlroy said.

And then there are the Americans.

There are myriad reasons the United States lost its sixth straight Ryder Cup on foreign soil, a streak of futility that started after the 1993 victory at the Belfry when Bryson DeChambeau, the youngest member of this year’s team, was 10 days old.

Of the captain Jim Furyk’s four wild-card picks, only Tony Finau (2-1) finished with a winning record. The others — DeChambeau, Tiger Woods and Phil Mickelson — lost all their matches. The narrow fairways favored players who are straight off the tee, and six of the 12 Americans were ranked in the bottom 50 in the PGA Tour stat for driving accuracy (where Henrik Stenson of Europe finished first).

In the end, though, the United States lost despite parading out an all-star team that included nine players who have won majors, for the same reason as ever: The Americans are not a band of brothers.

In 2014, after another loss on foreign soil, Phil Mickelson disparaged Tom Watson’s my-way-or-the-highway leadership, leading to a rule-by-committee approach. But the harder the Americans try to manufacture a connection, a cohesion, the more spectacularly they fail.

The fellowship that the American team sought to create by papering its team room with inspirational sayings like “Leave your egos at the door” didn’t take this time. And at the Americans’ losing news conference, the fissure that had existed all along nearly broke wide open.

The last question in the glum post-mortem was directed at Jordan Spieth and Patrick Reed. They were asked about not being paired despite compiling a 4-1-2 record together in two previous Cups.

Like Molinari and Fleetwood, Spieth and Reed sat on opposite ends of the dais, but there was no frivolity — and certainly no blowing of kisses. Their eyes met, and Spieth read something in Reed’s expression that prompted him to jump on the answer.

“We were totally involved in every decision that was made,” Spieth said, adding, “Jim allowed it to be a player-friendly environment.”

Reed was seated at the far end of the table, directly next to Woods, with whom he had been paired in two lopsided losses against Fleetwood and Molinari. Reed, who rebounded to win his singles match against Tyrrell Hatton, 3 and 2, exchanged veiled looks and breath mints with Woods during the news conference. As Spieth spoke, he stared ahead, sucking on the mints.

Furyk said the decision to split Spieth and Reed had been his call. As Reed silently seethed, the news conference ended. In a telephone interview less than an hour later, Reed expressed his frustrations with how the pairings were handled.

He said he had conveyed to Furyk his desire to be paired with Spieth, who is not a good friend but with whom he has a chemistry that is hard to pinpoint, much less replicate. Spieth was his first choice, Reed said. His second choice, he said, was Woods, whom he said he loved.

But Reed fully expected to be paired with Spieth, and he felt blindsided, he said, when Furyk decided to pair Spieth with Justin Thomas, who starred with Rickie Fowler in last year’s Presidents Cup.

Spieth and Thomas have known each other since childhood and are great friends, but Reed didn’t see why that should have been a factor in splitting up two winning pairings (Spieth/Reed and Thomas/Fowler). Reed described the decision-making process as “a buddy system” that ignores the input of all but a few select players.

“The issue’s obviously with Jordan not wanting to play with me,” Reed said, adding, “I don’t have any issue with Jordan. When it comes right down to it, I don’t care if I like the person I’m paired with or if the person likes me as long as it works and it sets up the team for success. He and I know how to make each other better. We know how to get the job done.”

Spieth and Thomas went 3-1 as a team (their lone loss was by 5 and 4 to Molinari and Fleetwood). Fowler went 1-2 while playing with Dustin Johnson, the world No. 1.

Reed and Woods lost their first match against Fleetwood and Molinari, after which, Reed said, Woods apologised for letting him down. He said he told him, “We win together as a team and we lose together as a team.”

Reed expected Furyk to tweak the pairings after the first session. “I thought he might go back with the groups that have worked in the past,” he said, noting that Europe’s captain, Thomas Bjorn, sent McIlroy back out with Ian Poulter in the afternoon after he lost in the morning while paired with Thorbjorn Olesen.

Instead, Reed was benched in the afternoon, as was Woods. The next morning, Reed played again with Woods, and again they lost to Molinari and Fleetwood as Reed dumped multiple balls in the water hazards. Reed didn’t play the second afternoon session.

“For somebody as successful in the Ryder Cup as I am, I don’t think it’s smart to sit me twice,” Reed said.

Reed, who earned the nickname Captain America for his fiery play in the 2014 and 2016 Ryder Cups, was the ninth match off the first tee in Sunday’s singles session. Unless the United States staged a furious comeback, the outcome was not going to rest on his shoulders. He played well, giving himself a birdie putt on every hole on the front nine. But it didn’t matter. Europe had secured the victory by the time he finished Hatton off.

When Reed and Spieth were asked about their split-up in the interview room, “I was looking at him like I was about to light the room up like Phil in ’14,” Reed said.

Reed thought of all the inspirational sayings he had read in the team room. “Every day, I saw ‘Leave your egos at the door,’” Reed said. Referring to the Europeans, he added, “They do that better than us.”