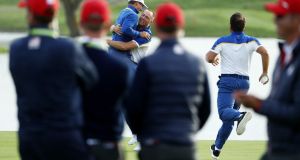 Alex Noren of Europe celebrates with Thorbjorn Olesen after winning his match on the 18th green as Europe win the Ryder Cup at Le Golf National in Paris, France. Photo: Jamie Squire/Getty Images

Didn’t it feel like old times? Like all those Ryder Cups from the nineties and noughties when the Yanks would bring a busload of swaggering star names to the first tee of a Ryder Cup only to walk off the 18th green scratching their heads at the wonder of it all. An American captain having nothing go right, from his picks to his pairings and back again. And there in the background, a skulking, sulking Tiger Woods, looking like he was already halfway across the Atlantic in his head.

Wasn’t this supposed to be a thing of the past, though? Wasn’t it what all the fuss was about, the task force and whatnot? The USA team lost this Ryder Cup in such an old-fashioned way, never coming to grips with the course, never coalescing with that indefinable mojo that has now won Europe nine of the last 12 editions. They brought nine major champions to France – the two of them with 20 between them went home without winning a match and three more only managed a point apiece.

“We’re going to get second-guessed and we’re going to get questioned,” said Jim Furyk afterwards. “I realise as a leader of this team and as a captain, the brunt of itis going to be on my plate and I accepted that when I took this role.

“You know, we came over here and played our practice rounds and prepped for this golf course and I’m going to say it over and over and over again – I have every confidence in these 12 players that you could. I think we have a great team. I would take them right back into another Ryder Cup and play it all over again if I could. You can call me crazy but I have every belief that these guys could get it done. I still do and I still would again.

“Obviously there’s a sour taste in our mouth to come over here now for 27 years and not be able to win on foreign soil. That’s the goal. We want to be successful in this event. We want to grow and we want to get better but we want to do it here in Europe. That will be the goal four years from now.”

The aftermath had that curiously old-style feel to it, where you half-wondered if the Americans are really into this thing at all. They clearly are – or they clearly were two years ago at any rate and life can’t have changed all that much in the meantime. But from the lunchtime turnaround on Friday, they kept losing matches in this Ryder Cup in the most pointless manner possible.

Dustin Johnson fought Ian Poulter all the way to the 18th green on Sunday but just as he has all week, he spilled crucial short putts when it mattered. Woods should have beaten Jon Rahm who was playing on pure adrenaline and missing a heap of tiddlers himself but the grim visage Tiger wore here all week never left him and as soon as he drew all square on the 12th, he promptly gave up back-to-back bogeys and handed the initiative back to the Spaniard. He has now lost seven of his eight Ryder Cups.

On the European side, the raw emotion on show was clearly a factor in winning rather than just the result of it. Rahm roared the leaves from the trees with his winning putt against Woods. Sergio Garcia, Ian Poulter and Paul Casey made no effort to hold back the tears afterwards.

The affection between the star pairing of Francesco Molinari and Tommy Fleetwood is demonstrably real and tender almost, in a way that would be unimaginable on the American side. If none of this matters in the way that finding a few fairways and holing a few putts matters, the least that can be said is that the European players themselves think it’s important.

“I think there’s just something about this group of guys,” said Rory McIlroy. “I think, for example, Ian and I sort of got word on Wednesday night or Thursday morning that we were going to play foursomes together. But we’ve played together before and we’ve been successful – or Ian’s been successful and I’ve watched.

“I just think we all get along so well. We’ve known each other for a long time and there’s a continuity in our group that maybe the other side don’t quite have. Even the rookies in our team, we’ve all known for a long time – I first played with Thorbjørn [Olesen] in the Egyptian Open in 2010.

“We’ve known each other for a long, long time and we get along well. The togetherness of the team, the great camaraderie we have, that’s built up on the European Tour and obviously we all have our separate lives going on but once we get together for the Ryder Cup, we all come together as one.”

Predictably enough, his captain warmed to the theme.

“It’s a great group,” said Bjorn. “It’s a group that believes in themselves and what they stand for and they carry the torch on for what the European Ryder Cup teams are all about. They understand the history. They understand what we’re about and that’s what will do them great going forward.”

For how long? Well, that depends on the Americans, really. They will always have the golfers. It won’t matter unless they can craft them into a team.