TV View: Phil saves us just in time to watch Cardiff and Burnley 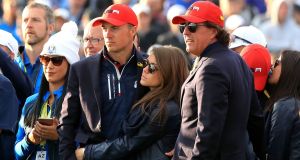 Between 2:37 and 2:59 there wouldn’t have been a bum on the continent of Europe that wasn’t squeaking, a comfy lead of four points dwindling to just the one as the USA threatened to turn D-Day in to a thriller. Even Phil Mickelson almost looked interested at that stage, having previously given the impression of a man who feels much the same about the Ryder Cup as he does about America’s Internal Revenue Service.

But for the viewers at home, who might have thought that Sunday would be a cakewalk for the Boys in Blue, the prospect of a serious contest presented them with the excruciating dilemma of whether to stick with the golf or switch to Sky’s Super Sunday clash of Cardiff v Burnley.

In the end, the Sporting Gods proved to be super accommodating, by 4:02 the Ryder Cup was won which meant only 120 seconds of the game had to be missed. Whether Phil had that in mind when he inserted his ball in the lake, who knows, but Francesco Molinari didn’t care. As Phil’s ball was drowning he was punching the air before being saturated in yellowy liquid by exceptionally emotional fans, the hope being that it was beer.

Ian ‘Poults’ Poulter then arrived on the scene and hugged Francesco so tightly the Italian almost popped. “YOU ****ING BEAUTY,” said Poults, which prompted Ewen Murray to apologise to us for the un-golf-like language, when, to be honest, Europe’s shirts, which resembled something Coventry City might have worn away from home in the 1980s, were way more offensive – and he never apologised for them.

Tim Barter finally got hold of a dripping Francesco who said this was a day he would never, ever forget, a bit like those of us who watched it all on Sky will never, ever forget that Paul McGinley might not have been the greatest golfer in the world but Allianz still supported him in no small way over the last 26 years.

Other than that, what will never leave our minds, no matter how hard we try to erase it, was Wayne Riley’s piece for Sky before we got up and running, when he turned himself in to Inspector Clouseau, treated us to a French accent that would have failed an ‘Allo ‘Allo audition, lurked around Le Golf National saying things like ‘ha hee haw’ and ‘ooh la la’ in a Sydney accent, while investigating why the course was not to the Americans’ liking. It was a mind-melding experience.

When we returned to the studio Paul McGinley was looking at his feet, Laura Davies was examining the ceiling, and Butch Harmon was staring in to the camera in a ‘WTF?’ kind of way.

David Livingstone tried to take Butch’s mind off what he had just witnessed by asking him what he would have said to the USA players if he’d been in the team room after their Saturday efforts. “I couldn’t repeat the language I’d have been saying to them,” he replied, which drew a chuckle from José María Olazábal who was sitting beside him, bedecked in an Allez Allez scarf lest you were wondering who he was rooting for.

Butch, then, was peeved, suspecting his lads weren’t entirely up for it, but his mood lifted considerably once it was evident that Justin Thomas, Brooks Koepka and Webb Simpson were giving it a lash in the day’s opening three pairings.

“This is golf on steroids, this is awesome,” said Wayne, who’d ditched his beret and string of onions and was back to his usual self.

Which couldn’t be said for Tiger, the fella looking like a man who’d rather be watching Cardiff v Burnley than golfing versus Jon Rahm on a Parisian Sunday afternoon.

And as the afternoon wore on, passing the squeaky bum 2:59 mark, it was largely a procession of the blue-ish kind, your heart having to go out to Alex Noren who still had his contest to settle against Bryson Dechambeau long after his team-mates were opening their 36th magnum of champagne. Mind you, you had to feel for Bryson too, not least because he was serenaded with “you’re French, and you know you are” from the very moment he set foot on the course. And Bryson is many things, but French possibly isn’t one of them.

A late consolation for the U S Eh, a victory for Patrick Reed over Tyrrell Hatton. Patrick said “ssssssh” to the crowd and Butch lost his mind. “Oh don’t come with that crap, what are you doing, that’s ridiculous, show some class Patrick!” Patrick, it would be accurate to say, isn’t widely loved, but was he not just having the craic?

No matter, job done, the Americans mullered. Daveeed Ginola, our closing ceremony MC, congratulated Europe on winning the “Radar Coop” and offered his condolences to “Jim Fure-eek”, Wayne Riley rolling his eyes at the ‘Allo ‘Allo-ness of it all.

And then Daveeed set eyes on Tommy Fleetwood and there was sadness in his eyes. Yesterday’s mane. In 26 years’ time, Tommy might well be reminding us in our Ryder Cup ads how L’Oreal had supported him in no small way, because his flowing locks were worth it.