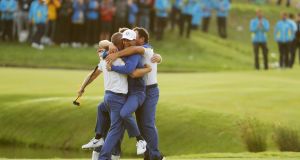 Alex Noren is mobbed by his European team-mates after winning the final singles game against Bryson Dechambeau of the Unitede States at the Ryder Cup in Paris. Photograph: Mike Ehrmann/Getty Images

The blue hue filtered a way into every image, as Europe again reigned supreme over the United States in this 42nd edition of the Ryder Cup.

And, on a Sunday on the outskirts of Paris which showed an unabridged version of sporting unity on the continent, the victory margin of 17½ points to 10½ only served to underline how dominant a team of five Englishmen, two Swedes, two Spaniards, a Dane, an Italian and a Northern Irishman which morphed into one proved to be.

That Francesco Molinari – in this year of years – actually secured the winning point was perhaps as fitting as any, his contribution of five wins from five providing a feat never previously achieved by all of those great European players who had gone before. Sergio Garcia, too, etched his name into the record books, overtaking Nick Faldo as winner of the most points – 25½ in his career – for Europe in this biennial match.

Having carried a four points lead into the final session of 12 singles, Europe held the upper hand. Yet, for a period of the afternoon, the roars from the crowds grew a little quieter as those at the top of the order charged with inducing an American fightback did their jobs. Only, when it mattered, that revival faded and it was Europe who slowly but surely and tellingly turned the screw so that the inevitable came to be.

The USA were left to reflect on a right old thumping from Europe, with two of their most storied players, Tiger Woods and Phil Mickelson, most brow-beaten of all: Woods went zero-for-four in his matches, a statistic which left him crest-fallen, while Mickelson lost his only two outings.

Mickelson, indeed, had the ignominy of hitting his very last play into a watery grave when his tee shot on the 16th plunged into the hazard and his next action was to concede the match to Molinari, their handshake taking place without ever leaving the tee complex. It could conceivably be Mickelson’s last act as a player in the Ryder Cup, with the contributions of the US ‘wild card’ picks poor in stark comparison to that from Europe’s captain picks, especially Garcia (three points from four matches) and Henrik Stenson, who was 100 per cent in his three.

The winning and losing of this match came on the course. Europe – battle-hardened by playing so many French Opens on the Albatros course, with its tight fairways and large greens – were more adept at staying out of the heavy rough and, when it mattered most, holing the putts.

Rory McIlroy was taken out by Justin Thomas in the top singles; world number two Justin Rose was usurped by Webb Simpson, and Tommy Fleetwood was outplayed by Tony Finau. Yet, if such beatings were hardly in Thomas Bjorn’s strategy, the American surge was halted as Paul Casey – playing a first Ryder Cup in 10 years – birdied the 17th to get back on level terms with Brooks Koepka to secure a halved match and Jon Rahm, desperate to make a contribution, birdied the 17th for a 2&1 win over Tiger Woods.

Rahm’s reaction to holing that putt was full of passion, his chest bursting and his eyes streaming tears.

On Saturday night, Rahm – who had not contributed a point in the first two days of play – had been taken aside by Garcia. His childhood hero told him what he was capable of doing in the singles, and of the huge belief he had in him. “I told him to show everybody how good he is,” revealed Garcia.

Those words were brought into the fray, acting like a 15th club as Rahm went toe to toe with Woods, who looked a different man from the one who only a week earlier had rubber-stamped his comeback by lifting the Tour Championship title in Atlanta.

Thorbjorn Olesen had also made a hugely impressive contribution, right before Rahm’s win. The Dane, benched for all of Saturday’s play due to Bjorn keeping the momentum of the Molinari-Fleetwood partnership active, had five birdies in seeing off Jordan Spieth by 5&4. Once full of energy in playing fourballs and foursomes with Thomas by his side, Spieth failed to get going at all on his own.

And, so, Europe – its blue tide in danger of being diluted by a red recovery on the leaderboard – regained control of its own destiny. Familiar faces were on the job. The scores on the board? 13½ to 9½, but with Molinari, Poulter and Stenson dormie in their matches, it was a matter of who would get there first. Molinari got the honour.

Poulter recovered from being one down with six to play to out-duel world number one Dustin Johnson, who didn’t help his own clause by finding the water hazards on the 13th and 15th holes. Poulter, as he does, sealed the deal in a 2up win with a birdie on the 18th.

And Stenson – the “Iceman”, his injured elbow a forgotten part of his anatomy – delivered a resounding 5&4 win over Bubba Watson while his compatriot Alex Noren – playing for over an hour while his team-mates celebrated – stuck to his task to close out with a monster birdie on the last to beat Bryson DeChambeau.

Twelve men, one team. And, in regaining the trophy, Europe – beaten at Hazeltine in 2016 – made it seven wins in the last nine matches and extended the American drought on European soil which dates back to 1993, 25 years of heartbreak.

The secret? Europe played the better golf. “I think that we didn’t drop our guard all week long. We stayed on point as a group and the discipline we showed got us to this point,” said Rose.

Unity of purpose, and unity of mind. One team. Winners.

Sportsman to statesman, Marcus Rashford is a ray of light in the darkness 12:29
Patrick Cantlay takes Zozo Championship after late ambush 11:10
John Cooney called into Ireland squad for France clash 10:58
All in the Game: Klopp’s Amsterdam subs don’t go down well 10:00
The Offload: Outgoing Tom Grace will be missed by IRFU 10:00
Here is your handy guide to sport on television this week