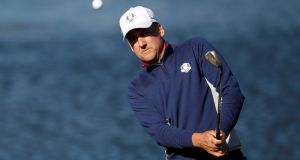 Ian Poulter insists he will sacrifice his brilliant individual record for team success as Europe attempt to regain the Ryder Cup in Paris.

Poulter has become a talismanic figure for Europe since making his debut in the biennial contest 2004, earning the nickname of ‘The Postman’ because he always delivers a point.

The 42-year-old has won 13 points from 18 matches and famously birdied the last five holes of his fourball match with Rory McIlroy in 2012 to keep European hopes alive and spark the ‘Miracle at Medinah’.

However, when asked if he would accept not winning a single point at Le Golf National as long as captain Thomas Bjorn was the man lifting the trophy, Poulter said: “Of course. 100 per cent.

“It’s always about the team and however you go about putting that trophy in Thomas’ hands, it would be a very proud moment to be part of that team. So we win together, we lose together. But as long as we win as a team, that’s all that really matters.”

Poulter’s record in the contest makes him something of a target for the opposition, but unsurprisingly that is something which does not bother the combative Englishman.

“I take it as a huge compliment, I think, more than anything else,” added Poulter, who was restricted to a vice-captaincy role as Europe lost 17-11 at Hazeltine in 2016.

“It’s a daunting position to be in to know that everyone really wants to take you down, but quite frankly, I want to take them down just as much.

“That’s why this week is so special. You can be good friends week-in, week-out, but when it comes to the Ryder Cup, there’s something extra special there, and it means so much to want to win and have to win.”

Poulter will be the 46 by the time of the next Ryder Cup in Europe and is expected to follow in Bjorn’s footsteps as a captain at some point, but he is not prepared to accept that this week will be his last appearance as a player on home soil.

“It won’t be,” he added. “I would like to think I’ve got more in me; I’ll say that. I mean, I really do. I think how I’ve played this year is hopefully the start of me kicking forward again to play in some more.

“The reason I answered it that way is I don’t want to think that this is my last hurrah. I would like to be part of Team Europe moving forward and I would like to play some more. It’s that special to be a playing member of a team.

“But if it is [my last one] and I can support it in other ways, then that would be great, as well.”

Poulter looked to have lost his PGA Tour card in 2017 before a mistake in the way his points had been calculated was spotted by a fellow player, a reprieve he made the most of by finishing second in the Players Championship in his next event.

Victory in the Houston Open in April was his first since 2012 and although he failed to qualify automatically for the team, there was never any doubt that he would receive a wild card.

“I guess when you are at the low of lows, and that wasn’t that long ago, there is a little voice in the back of your head that says: You might not get back to as good as you was,” Poulter added.

“But I was at a PGA dinner in December 2016 and was asked ‘What’s left for me in golf? I said ‘I feel I’ve got more wins in me’ and I said then I’m going to make the team in Paris.

“That’s been a goal for the last 18, 20 months. It’s been something which has kept me going from a motivational standpoint. It was difficult being vice-captain last time, knowing how much I’ve helped the team in the past.

“I really wanted to make the team. I felt if I work hard, if I refocus properly, restructure things, then I definitely could make this Ryder Cup team, which I have, so I’m pretty proud.”