Rory McIlroy out of sorts in fourballs nightmare 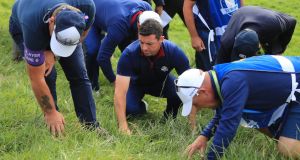 Team Europe’s Rory McIlroy looks for his ball on the ninth hole during the fourballs match on day one of the Ryder Cup. Photograph: PA

Rory McIlroy was so out of sorts with himself that we had to wonder was it him at all? Perhaps a doppelganger had infiltrated the team room and locked the real deal in a cupboard? Something like that, because the player who walked to the first tee with Thorbjorn Olesen wasn’t anything like his old self.

Okay, at the start he was. But that was before he hit any shots. He stood on the first tee, again hatless, showing off his new haircut, and faced the crowds massed in the grandstand and started the Icelandic thunder clap to a perfect rhythm that was absent when it later came to swinging his golf clubs.

In good spirits so before a ball was struck in anger, but as one shot after another dived right as if in a game of hide and seek, McIlroy’s frustration manifested itself in his arm stretching up behind his neck and rubbing it as if that would solve all of his problems.

One statistic from McIlroy’s fourballs match stood out like a sore thumb. He didn’t manage a single birdie in the 16 holes he played alongside Olesen before he was put out of his misery with a 4 and 2 defeat to Dustin Johnson and Rickie Fowler, the only solace perhaps being that the 16th green meant a short ride back to the team room to clear his head.

McIlroy’s driver caused problems throughout. No fewer than five times in the first 10 holes did McIlroy watch aghast as he pushed one tee-shot after another, where his golf ball plunged into heavy rough. On the seventh, for example, he was buried so deep that, although a marshal found the ball, it required a second search when McIlroy walked away and couldn’t find it on returning. He advanced it only 10 yards, and then scooped it up into his hand using his lob wedge, his interest on the hole over.

Again, on the ninth, the ball played a game of hide and seek. At this stage, even Fowler was feeling sorry for his friend’s plight and was almost on hands and knees in the thick rough trying to find McIlroy’s ball. When you’re getting the sympathetic actions of a rival in the white heat of battle, you know you’re in trouble.

McIlroy, it seemed, could do nothing right. The harder he tried, the more frustrating it got. Any time it looked like he would get momentum, he was sucker-punched. On the eight hole, a Par 3 of 190 yards, McIlroy’s tee shot was the only one to find the green, 18 feet from the flag. But he three-putted, and his embarrassment was only rescued by Olesen getting up and down, holing a 10 footer for a winning par. That putt quite remarkably put the Europeans one up. It was as good as it got.

Fowler birdied the ninth to level and the 10th to put the USA one up and then world number one Johnson - who’d never previously beaten McIlroy in a fourballs - birdied the 12th and then made the most of his good fortune on the 13th when his tee-shot finished inches from a water hazard. He put the approach to six feet, rolled in the putt and suddenly the Americans were three-up. The clocked ticked down, and Johnson’s birdie on the 16th finally closed the door.

When it was all over, Thomas Bjorn put his arms around McIlroy. To console him, and to let him know that he would get a chance for redemption in the foursomes.

“They’re great ball-strikers and we knew it would be a tough match,” said Johnson, and he said it with a straight face. McIlroy would be the first to put his hand up and admit his ball-striking was not what he would want it to be. Olesen, who carried him for much of the way before finding the load too heavy, would have agreed.