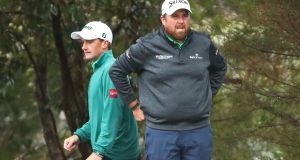 Shane Lowry and Paul Dunne of Ireland talk on the ninth hole during day two of the 2018 World Cup of Golf. Photograph: Scott Barbour/Getty Images

Thomas Pieters and Thomas Detry staged a wet weather clinic at the World Cup of Golf on Friday to give Belgium a share of the lead with South Korea, as the top nations floundered through atrocious conditions during the second round.

They are six shots ahead of Irish duo Shane Lowry and Paul Dunne who shot a second round 76 in Melbourne. Failing to take any momentum from their opening 64, their bogeys arrived on the fifth, 11th, 12th and 16th holes in a disappointing round.

Amid howling wind and driving rain at Metropolitan Golf Club, the unfancied Belgians were mostly seamless in the foursomes, shooting a one-under 71 to move to a 10-under total of 134.

“It was just like horizontal rain,” Detry told reporters. “So wind got up, wind didn’t drop, so it was just a tough day all round.

“I’m excited for my shower tonight.”

Overnight co-leaders South Korea were almost as impressive, with Kim Si-woo and An Byeong-hun combining for a 72, as only four teams in the 28-nation field scored under par.

A tournament touted as a gathering of top golf nations bordered on farce at times, as players trudged through puddles and bashed their way through thickets after spraying errant shots into trees.

Joint overnight leaders Australia stumbled to six-over by the 12th hole, the duo of Marc Leishman and Cameron Smith spending much of their day trying to mop up each other’s mistakes.

The pair rallied with three consecutive birdies from the 14th to remain in contention four strokes off the pace.

Thrashed by Europe at the recent Ryder Cup, the United States’ struggles in team events continued as Matt Kuchar and Kyle Stanley crashed to a seven-over 79 to fall 11 strokes behind the leaders, their title hopes all but shot.

With no let-up in the rain, tempers frayed.

English firebrand Tyrrell Hatton smashed a tee marker to smithereens with his driver after shanking into the trees at the par-four 10th.

Far lower down the leaderboard, Greece’s Peter Karmis and Alexander Tranacher, who qualified after Austria pulled out of the tournament, had a nightmare day.

They staggered back to the clubhouse after a 15-over round of 87, featuring three triple-bogeys on the back nine.

Second round scores and totals (Par 72):

1 Gerry Thornley: Talk of Anglo-French hegemony is over the top
2 What next for green jersey hero Sam Bennett after the toughest of Tours?
3 The Offload: Saracens prove Pro14 is not fit for purpose
4 Two medals in one day: the daunting task facing Galway’s Daithí Burke
5 Born to ride, born to win: Sam Bennett, the making of a green machine
Real news has value SUBSCRIBE

Doctor Duffy leads the betting for Wednesday’s Kerry National 06:00
Different Strokes: Bryson DeChambeau wants to go further 06:00
Shane Lowry brings the X-Factor to an Irish Open like no other 06:00
Netflix to capture Hamilton’s bid to equal Schumacher’s record 06:00
Ulster GAA warns crowds could be banned after Tyrone pitch invasion 06:00
Here is your handy guide to sport on television this week