Paul Dunne and Shane Lowry head down under for World Cup 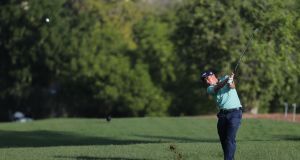 Paul Dunne of Ireland plays a shot during day one of the DP World Tour Championship at Jumeirah Golf Estates in Dubai. Photo: Karim Sahib/Getty Images

Shane Lowry and Paul Dunne boarded a plane in the early hours of Monday morning in Dubai heading for Melbourne, a flight of 13 hours, and a final travel stamp on a long season that hasn’t been satisfactory, by their own admission, for either player.

They will represent Ireland in the ISPS Handa World Cup, which starts on Thursday, looking to emulate the achievements of Harry Bradshaw & Christy O’Connor Snr in Mexico (1958) and more recently Pádraig Harrington & Paul McGinley at Kiawah Island (1997) in winning the tournament.

Lowry finished in a tie for 30th place (€62,136), Dunne in a tie for 41st place (€44,559) in the DP World Tour Championship in Dubai, the European Tour season ending finale and ordinarily would travel in expectation rather than hope to a tournament with a €6,134,765 prize fund, that takes place at the Metropolitan golf club in Melbourne’s ‘Sandbelt’ region.

The tournament is a 72-hole stroke play team event, comprised of two players from the 28 competing countries. The first and third days are played in the fourball format, the second and final days are foursomes in what is the 59th staging of the event that dates back to 1953.

The highest ranked player in the 28 competing countries, who wants to play, gets to choose a teammate and Lowry plumped for his good friend. He explained: “Paul’s a great putter; my game tee-to-green is going well so if we can somehow dovetail well down there we will do alright. It’s been a long year for both of us.

“I am certainly not happy with my year and I don’t think Paul is with his, so we have a chance to salvage something (in Melbourne). We need to go down and try and enjoy it as much as we can. We are playing for our country and try and get the best result possible.

“In that format and that game if you get too down, if the two of you are moping about a bit, it becomes a long week. It’s about going down there and salvaging our year.”

There are challenges apart from the golf. Lowry continued: “We don’t get there until 12.0am on Monday night. We have an opening ceremony Tuesday evening, a Pro-Am on Wednesday. We have about five hours on Tuesday to figure out how we are going to play the golf course.

“We are very busy when we get down there and it’s going to be a case of long days. I think as much sleep as we can and when we are awake as much coffee as we can. That’s going to be the plan for the week,” he smiled.

The four days in Dubai were tinged with frustration. Lowry struck the ball beautifully at times but his putting struck a discordant note. He explained: “The last hole (on the Sunday in Dubai) there sums it up I hit two of the finest shots you’ll ever see and didn’t come close to holing the putt and that’s where my game was at all week. I mean I need to find something in my putting if we are going to do anything down there (in Australia).

“I don’t feel uncomfortable. Every time I go onto the putting green, doing my drills I do them well and on the course I feel like I’m hitting decent putts. I don’t know what it is. This week in general more so than any other week, I haven’t managed to hole anything.”

It’s in marked contrast to Dunne whose putting has been excellent but has been unable to compensate for a misfiring long game. “I know he’s (Shane) been playing well. I have played a lot with him over the last few weeks. I feel like for the two of us if I can find a tiny thing tee to green we have a great chance to win. I know he is playing well and my short game is in really good shape. We can go down there and be in it to win it.

“It’s always nice to have a flag beside your name. It will make it a bit extra special. It’s a great tournament to finish the season on. Hopefully we can click and have a great week.”

Reflecting on his own season the highpoint of which included a couple of Top 10 finishes in April, he admitted: “I haven’t had a good season; I have had a bad season really. I had a good stretch of six weeks and apart from that it has been pretty poor.”

Rory McIlroy, who finished in a tie for 20th place in Dubai following a sterile scoring weekend – he was eight under for the opening 36 holes and level par for the Saturday and Sunday – will play one tournament in the next 13 weeks, the Sentry Tournament of Champions in Maui in January.

He said: “It’s been a busy season; 27 events is a lot for me. I am looking forward to a few weeks off, work on a few things and enjoy a bit of time off”, which will include best man duties at his caddie Harry Diamond’s nuptials next month.

Graeme McDowell finished in a tie for 11th place in the RSM Classic at Sea Island Georgia five shots behind the winner Charles Howell 111. Michael Hoey, Cormac Sharvin and Robin Dawson will play in the Australian PGA Championship from November 29th-December 2nd.