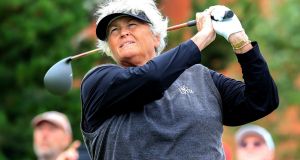 Laura Davies has been named as a vice captain of Europe’s team for the 2019 Solheim Cup. Photo: Peter Byrne/PA Wire

Never say never, for one of the heart-warming tidbits of news to emerge anywhere on the golfing front this week came with confirmation that Laura Davies would form part of Catriona Matthew’s backroom team as a vice-captain for next year’s Solheim Cup match against the United States at Gleneagles.

That September showdown – when Europe will seek to end the USA’s recent dominance – is all of 10 months away but the reason to be cheerful is that Davies – who has always said she had absolutely no interest in ever captaining a team – is on board. Baby steps and all that, but it is the first real move in Davies perhaps changing her mind and fulfilling the role of the European captaincy at some point in time.

Davies is different in so many ways, and if and when she ever decides to be captain, you can bet your bottom dollar that she will bring her own style to the gig. You can throw your templates out the window if that time ever comes, for she truly is one of a kind.

This is a player who has amassed 87 professional wins in her career around the globe, including four Major titles. Two of those professional titles came in Ireland, both at St Margarets, where she won the Irish Ladies Open in 1994 and 1995.

That second win was something to behold, as it was arguably the most dominant performance ever on the LET as she finished some 16 strokes clear of her nearest challenger Asa Gottmo. Davies’s appeal back then was such that she was a magnet for spectators, with what seemed like the entire crowd at the north county Dublin venue following only her group.

Her legend was only enhanced by the fact that she enjoyed a pint of the black stuff, enjoyed a bet and, more often than not, would kick up a tuft of grass using her spiked shoes rather than use a tee. Practice was something to be avoided too. But most of all she played her own brand of golf that frequently finished with her lifting a trophy when all was said and done.

Davies’s agreement to be one of Matthew’s vice-captains – along with Suzann Pettersen and Kathryn Imrie – could yet indicate a change of heart in perhaps one day assuming the captaincy.

For a player who was the heartbeat of so many European teams, winning a record number of points (25) and playing in more Solheim Cups (12) than anyone, Davies owes nothing to anyone when it comes to the biennial event. But hers, you feel, would be a captaincy unlike any other . . . and that could only be a good thing if it ever comes to pass. Never say never.