Rory McIlroy cruises into contention with 67 in Dubai 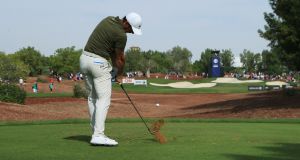 Rory McIlroy shot a five under par, 67, to move to eight under par and join a cluttered race in pursuit of leader England’s Matt Wallace at the DP World Tour Championship in Dubai.

The 29-year-old Northern Ireland golfer engineered the perfect start to his round with a glorious approach to four feet on the first, which he rolled in for birdie and then reached the Par 5 second in two shots. His 35-foot eagle putt came up slightly short but he holed out from 36-inches.

At five under he had almost caught the overnight leaders but on the next pulled a wedge that ended up 50-feet from the pin and from there he three-putted for bogey to stifle that momentum. A wonderful tee-shot to the par three, sixth came to rest a foot from the hole and he tapped in for a third birdie.

The world number seven should have had another at the Par 5 seventh but watched in horror, as the birdie putt did half a lap of the cup and stayed out. Undeterred he continued to press, even from less advantageous places.

On nine, he hooked his drive into the rough, caught a good lie, and then fired an approach to six feet, converting that for birdie and then added another on 10. As he had on the front nine, there was a momentary blip with a bogey on the 13th but a brace of birdies on 14 and 16 took him to eight under.

There was still time for a little drama when he watched his second shot to the 18th career into the grandstand and rebound into a bunker, from which he couldn’t get up and down, instead settling for a par. Given the trajectory of his second shot and the list of possible outcomes he wasn’t too upset.

His playing partner, the 2018 US Masters champion Patrick Reed went one better, shooting 66, a blemish free card that contained six birdies, on a day when half the field gorged on easier pin positions.

Paul Dunne improved on yesterday’s level par 72, with a three under, 69, benefitting from a solicited swing tip from Justin Parsons, an instructor at the Butch Harmon School of Golf in Dubai and originally from Killinchy in Northern Ireland. Dunne explained: “I asked Justin Parsons to have a look at me. People phrase things differently (so it was) a fresh perspective.

“Someone says the same thing slightly differently and it just clicks in your head. I was going out just thinking even if I hit three shots that are exactly as I pictured, it is something to go with because I didn’t hit any of them yesterday. I hit a few more than three which is nice.”

Shane Lowry endured a frustrating day – three birdies, three bogeys, including a tee shot that found the water on the 17th to be one shot further back on two under. He produced two sensational rounds at the weekend last year and admitted that “he’d go chasing birdies” in the morning.

Ben Youngs pens a new deal with Leicester 12:05
Solskjær says United’s unbeaten run is ‘nowhere near’ enough 11:53
Eric Dier given four-game ban for confronting fan in the stands 10:59
A glimpse of rugby’s future; assessing Herbert Chapman’s impact on soccer 07:15
England and West Indies defy odds to begin summer Tests 07:00
Here is your handy guide to sport on television this week