Wallace sets the pace as McIlroy picks up speed in Dubai 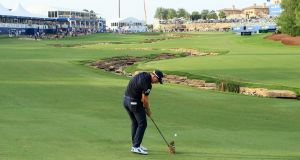 It’s a long way from the Alps Tour to the summit of the DP World Tour Championship leaderboard in Dubai, the European Tour’s lucrative season-ending finale.

But that’s the route undertaken by England’s Matt Wallace and in the process ha has climbed 1,600 places in the world rankings.

A blemish-free, seven under 65, took him to 11 under for the tournament going into the weekend and a one-shot lead over 2016 US Masters champion Danny Willett (67) and the joint overnight leaders Adrian Otaegui (68) and Jordan Smith (68).

Patrick Reed, who won the US Masters in April, and his playing partner Rory McIlroy also clambered into contention, while in the tussle for the Race to Dubai final standings, yesterday’s roles were reversed with England’s Tommy Fleetwood (67) moving into a tie for sixth place while Francesco Molinari (73) tumbled down the leaderboard.

The 28-year-old Wallace, who played collegiate golf at Jacksonville in America, was on the cusp of looking at an alternative career in his early twenties but he persevered, winning six times on the Alps Tour in 2016 and the following year claimed his first tournament success on the European Tour, the Portuguese Open.

This season, though, his results have been stellar by any yardstick, winning three times, the India Open, the BMW International Open and the Made in Denmark tournament and he was desperately unlucky not to make the European Ryder Cup team that beat the USA in Paris.

Understandably pleased to have posted the joint-lowest round of the tournament to date, his priority on Saturday is to position himself to contend and if he can accomplish that then he’ll glean confidence from his previous tournament victories.

“I’ve got a theory that the best putter on Sunday normally wins, and so if I can keep doing what I’m doing and get myself in contention come Sunday, I’ll just try and hole the putts.”

The pedigree of the pursuing pack would give most a crick in the neck on a course that yields a plentiful supply of birdie and eagle opportunities.

Rory McIlroy’s trajectory in form terms continues to rise; the incremental improvement in his scoring underpinned by confidence with the driver and the manner in which it permeates the other areas of his game. Two birdies in the first two holes, the longer putt from four feet, provided him with the fast start he craved.

A three-putt bogey provided a minor blip as birdies at six, nine and 10 re-established an impetus in scoring and while the 13th proved unlucky, as it cost him a shot, a brace of birdies down the stretch restored a positive stimulus going into the weekend.

He said: “I hit good drives, was able to give myself good chances from the fairway, hit good iron shots and gave myself a lot of birdie tries. I felt I maybe left a couple out there but it is nice to shoot 67 and feel that way. It’s nice to be in the mix.”

Playing alongside Patrick Reed, McIlroy, it was suggested that they appeared to bring out the best in each other in golfing terms.

“We were 11 under par combined and we both played very good golf. We’ve had a couple of good experiences together on the golf course, Hazeltine in 2016 and the final round at Augusta this year. I have huge respect for Patrick and how he plays the game. I certainly seem to bring the best out of him,” added McIlroy.

Paul Dunne improved on yesterday’s level par 72, with a three under, 69, benefitting from a solicited swing tip from Justin Parsons, an instructor at the Butch Harmon School of Golf in Dubai and originally from Killinchy in Northern Ireland.

Dunne explained: “I asked Justin Parsons to have a look at me. People phrase things differently [so it was] a fresh perspective.

“Someone says the same thing slightly differently and it just clicks in your head. I was going out just thinking even if I hit three shots that are exactly as I pictured, it is something to go with because I didn’t hit any of them yesterday. I hit a few more than three which is nice.”

Shane Lowry endured a frustrating day, three birdies, three bogeys, including a tee shot that found the water on the 17th to be one shot further back on two under. He produced two sensational rounds at the weekend last year and admitted that ‘he’d go chasing birdies’ in the morning.

“It was a very frustrating day on the course. I got off to a nice start, birdied the second, missed a very short birdie putt on the third and then had a bad bogey on the fourth. I never really got it going.

“Even playing 17 I had a perfect number there and I thought a good finish and one birdie in the last two holes, four under wouldn’t be that bad. I hit just a horrendous tee shot and made a good bogey. I’ll just get out there and see what I can do. I need that bumper weekend to do well in this tournament.”

The tournament is shapely up nicely.

(British and Irish unless stated, par 72)

Rugby union looking more like league in Australia; Jack Byrne enjoying change of attitude in Cyprus 07:20
Amber Barrett hoping hard work will pay off with Ireland 06:44
West Ham ‘really disappointed’ after win over Leeds, says Moyes 06:28
Jamison Gibson-Park embracing life as the main man 06:53
Games remain on hold as the GAA wait for word from the Government 06:49
Here is your handy guide to sport on television this week