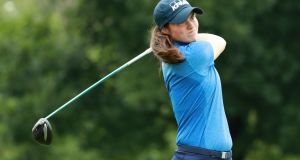 Leona Maguire made it to one under after five holes before rain ended play at the Andalucia Open de Espana in Marbella. Photograph/Scott Halleran/Getty Images

Leona Maguire’s Ladies European Tour debut was cut short by the rain in Spain as she managed just five holes at the Andalucia Open de Espana in Marbella.

Having made par on her first four holes, the 23-year-old from Cavan made a birdie on the par-five fifth hole to dip under par before play was suspended.

Scotland’s Michele Thomson and Anne Van Dam from the Netherlands set the clubhouse target before play was suspended.

Thomson and Van Dam recorded opening rounds of 68 at La Quinta before heavy rain led to flooded greens and forced the players off the course shortly after 3pm local time.

England’s Liz Young was also three under par after nine holes of her round, with Women’s British Open winner Georgia Hall a shot further back after two birdies in her first five holes.

Thomson came into the final event of the season in 80th place on the LET Order of Merit, just inside the cut-off point to keep her card for the 2019 season, but she is feeling relaxed.

“I’m just trying to enjoy the week and not really think about the pressure,” the 30-year-old from Aberdeen said. “I know that I’m a better player than how I’ve played this year so I want to go out and prove to myself that I can do it.”