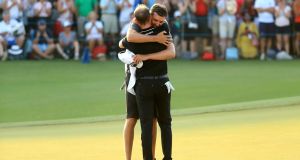 Danny Willett struggled to shake the fug of despair, the constant back pain that compromised his talent, and at one point made him ‘despise’ golf, a sport that provided lavishly in financial terms previously in his professional career and also allowed him to reach a pinnacle in recognition terms when winning the 2016 US Masters at Augusta National.

His world ranking plummeted to a low of 462, his game in freefall until last year’s US PGA Championship when he linked up with celebrated golf instructor, Sean Foley, willing to try anything. The work bore fruition on Sunday when Willett stepped back into the sunlight that victory in the DP World Tour Championship will afford from what he described “as a very, very dark place.”

Tournament golf tormented him to a point where he felt numb like it was “Groundhog Day; turn up, be in pain, miss the cut and repeat.” Gradually under Foley’s tutelage his game returned and his health improved; three Top 10-finishes an indicator before claiming a first tournament victory since his Masters success.

Golf may have appeared a cruel mistress in the intervening period but on Sunday in Dubai he enjoyed large slices of good fortune on a couple of occasions, holing an eagle putt from a different postcode on the second hole to his three-wood tee shot on the 18th, which came to rest one inch from a hazard. The two-shot lead he enjoyed at the time might have been a sufficient buffer but he would have been loathe to find out otherwise.

Starting the day alongside the current Masters champion, Patrick Reed, Willett profited from the American’s fallibility on the greens that saw him miss a couple of crucial putts inside six feet. Others briefly mustered a challenge but none could sustain the momentum and only Reed threatened to usurp the 31-year-old from Sheffield when coming down the stretch.

Missing from five feet for birdie on the 16th and a pulled tee shot on the par three, 17th that led to a bogey, scuppered Reed’s final push for outright honours. He had to settle for second place in a tie with England’s Matt Wallace.

Willett said of his struggles: “Yeah, it was a tough old time. You know, that’s why I’m a very lucky man. I’ve got a fantastic family at home and some fantastic friends that never really spoke about bad situations, bad times. (There were) a lot of positive people around, even when I was really not.

“To have (wife) Nic and the kids with me there all the time; you think about how fortunate you are, two healthy boys and a wonderful marriage, and golf is golf. My main aim was to be fitter and healthier at the end of this year than I was at the beginning; and if the golf is good because of that, fantastic. And if it’s not, we’ll keep working at it.”

He admitted that he drew on the experience of winning at Augusta to remain composed in attempting to close out the victory. “It’s one thing that you can’t teach is how you cope under pressure down the stretch. You can’t teach that. That just comes naturally to some people.”

Francesco Molinari’s coronation as the winner of the season-long Race to Dubai was all but assured after Saturday’s play. Tommy Fleetwood, the only man who could deny him by finishing first or second in the tournament - the Englishman was eventually passed by Reed who finished second - was too far back and so it proved, the Italian receiving a bonus payment of almost €1.1 million for topping the standings.

A tired smile creased his features as he reflected on the achievement. “It means a lot. You look at the players who have won The Race to Dubai or the Order of Merit before that, and obviously it’s only really the top players that have done it.

“So I said it at the beginning of the week; it means a lot because it’s a season a long race and on a week, you can beat anyone, really. You can have your perfect four days of golf and win a tournament, but to win something like this obviously shows how good the season has been.

“Obviously, ideally, it would have been nice to come here in better shape and close it out in better fashion, but I think obviously both Tommy and I, we’re really exhausted after a very long season, and you know, I’m very proud.”

The Irish challenge petered out, Rory McIlroy, signing for a 73 ditto Shane Lowry, while Paul Dunne produced a final round 70; the latter pair head to Melbourne this week to represent Ireland at the World Cup.

Lowry was more enthused by Ireland’s victory over New Zealand than his golf this week, having watched the match. “It was great, wasn’t it? I was quite reluctant to build up our chances for the next year going forward; there are going to be a lot of people jumping on the bandwagon and talking about the World Cup now.

“With a fit squad going to Japan, we genuinely have a great chance. So it is very exciting for our country.” McIlroy missed the game. He explained: “I feel asleep 15-minutes into the Scotland versus South Africa game. It sounded like it (a cracking match); I read a report this morning.”