€7.9 million exhibition match at Shadow Creek on Friday will be pay-per-view only 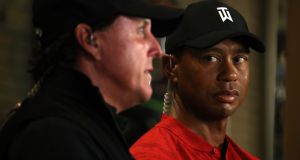 Phil Mickelson believes the multimillion-dollar prize pot in his winner-takes-all showdown against Tiger Woods is a necessary reward in order to manufacture the feeling of a major championship.

The American pair have had a storied rivalry through the years but it is Woods who has often had the last laugh, with Mickelson describing the 14-time major champion as “the greatest of all time”.

The respect they showed each other in a light-hearted press conference to promote Friday’s $9million (€7.9m) exhibition at Shadow Creek in Las Vegas was palpable.

The event is not open to the public but will be available to purchase on pay-per-view, and Woods and Mickelson pointed to the “unique” experience those watching will enjoy, with both players set to wear mics.

Mickelson said: “This event is designed to be a unique experience for the golf viewer and to have an insight into what goes on with the players to create a production from drone coverage to on-screen gambling, to live mics and interaction.

“It’s an insight into the game which you’re normally not able to see.

“It’s why it’s on pay-per-view, because we had to eliminate the commercials to have that insight in-between the shots.

“We don’t have the history of a Masters or a major championship, which is why the (prize figure) had to be so high because that creates an uncomfortable environment for us and creates pressure.”

Mickelson highlighted the number of occasions through the years when Woods had bested him and admitted his desperation to beat him in a one-on-one situation.

Mickelson added: “He’s the greatest of all time. I’ve seen him do things with a golf ball that have never been done.

“I just don’t want to lose to him and give him satisfaction because the bragging rights are going to be what’s even worse than the money.

“Every time I see you I want to be able to rub it in. I don’t want it to be rubbed in. I want to sit in the champions’ locker room at Augusta and talk smack, I want that.”

Woods, at 42, six years younger than Mickelson, made a successful return to the PGA Tour following a debilitating back injury — which required four operations in three years — and culminated in his triumph at the season-ending Tour Championship.

He said: “We’ve gone at it for over two decades and we’ve had our moments where there’s either been a regular tour events or major championships where we’ve gone toe-to-toe with each other.

“I’ve always enjoyed knowing the fact that I was going against Phil over these years because I knew he was going to be tough.

The duo confirmed all of the highly lucrative side bets will come from their own pockets.

Mickelson laid down the first challenge as he said: “I believe and I’m willing to risk 100,000 that says I birdie the first hole”, to which Woods replied: “Double it”, and was accepted.

The duo ended the media event by engaging in a mock staredown, similar to the head-to-heads at boxing weigh-ins, before shaking hands.