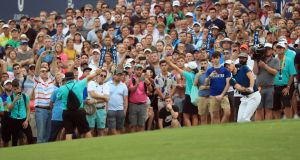 Danny Willett during the third round of the DP World Tour Championship in Dubai. Photograph: Andrew Redington/Getty Images

Danny Willett and Patrick Reed threatened to turn the DP World Tour Championship into a ‘Masters’ event as the 2016 champion and the incumbent title holder at Augusta National will embrace a duel in the sun over the Earth course in Dubai having escaped slightly from the elite field. They will play together in the final pairing.

One shot clear of Jordan Smith on 14-under par, outright honours are certainly not exclusively the preserve of Willett and Reed given the golfing credentials of their pursuers, including Lee Westwood, a winner in South Africa last week who also triumphed in this tournament in 2009.

The Englishman produced a marvellous, blemish free, 65, predicated on a blistering start with four birdies in the first five holes, and then picking up a further three shots on the back nine. Reed’s (68) efforts were more prosaic in comparison, although his five birdies in the final 14 holes underlined the consistency of his ball-striking.

Willett was just one under for his round after 12 holes but a hat-trick of birdies from the 14th allowed him to sign for a 68 and a share of the lead going into the final 18 holes.

In terms of the Race to Dubai standings, Tommy Fleetwood all but conceded victory to his Ryder Cup playing partner and friend, Francesco Molinari following a 74. The English needed to win or finish second with Molinari outside the top five but nine shots behind the leaders - he is one ahead of the Italian - it’s implausible to the point of the impossible.

Rory McIlroy (71) enjoyed a frustrating day in scoring terms that included a visit to the water on the par three, 17th. “I wish I was a little bit closer to the lead. I missed a couple opportunities coming in; bogeyed 13 but had a 6-iron in my hand on 14, the par 5, and made par there. I had a good birdie on 15, had a chance on 16 and then just a really bad swing on 17.

“I was thinking if I could have got to 12-under par, I’d have a really good chance going into tomorrow, but it is so bunched. There’s a lot of guys around the lead, and it’s just there’s so many guys between 9-under and 14-under that I’m going to need something special tomorrow to sort of get up there.”

Irish rugby is as strong as it’s ever been. Conor Murray is a big loss but I think they can go and do the business this evening

The Northern Ireland golfer admitted that he was going to break his traditional curfew tonight to stay up - the game kicks off at 11.0pm in Dubai - and watch Ireland’s game against New Zealand at the Aviva stadium. “I usually go to bed around half nine, ten o’clock, so 11.00 kickoff here is going to be a bit tough, but nothing a couple double espressos won’t sort out.

“It’s going to be tough. Sean O’Brien, being out is a massive blow; Conor Murray not playing (another) but (in) saying that, I thought the nines that played last week stepped in and did a pretty good job.”

Shane Lowry’s three under, 69, was not a reflection of the quality of his ball striking and golf in general but despite managing six birdies - he had three bogeys - it was on the greens that he struggled to convert those opportunities. Twice he stiffed wedges, the ball coming to rest a foot from the hole, but didn’t hole anything of length.

He admitted: “Yeah, look I played lovely today. I only hit a couple of bad shots and one of them cost me a double (bogey). I felt like I gave myself loads of chances but didn’t hole many putts and that has been the story of the week.

“The one thing I was happy with was that I made six birdies which is more than I have made in the last few rounds of golf. I have to figure out how to hole a few putts.”

He’ll give it a rattle tomorrow but first he has plans to settle in and watch Ireland take on New Zealand in rugby. “Irish rugby is as strong as it’s ever been. Conor Murray is a big loss but I think they can go and do the business this evening in Dublin and I am definitely going to go and watch it somewhere. There’s a good day’s rugby on so I will be watching a few games.”

Paul Dunne endured another disappointing day, despite turning in one under with a couple of birdies and a dropped shot on the par three, fourth. The logjam in scoring terms came on the 10th with a double bogey and from there he limped home in 40 strokes for the back nine, signing for a 75, and a three round total of level par.

“I just didn’t play very well. The back nine, I had a bad drive on 10 and that was the catalyst for the rest of the round, just sloppy bogeys like 16. The way I am feeling I am battling rounds like this.

“I would be more interested in finding a nice feeling to go into next week with as I have had so many tournaments where you shoot a 65 the last day and you go and play well the next week. It builds some momentum. That’s what I am looking for tomorrow.”

Rory McIlroy aiming to cut out the mistakes with Augusta looming 12:52
Sportsman to statesman, Marcus Rashford is a ray of light in the darkness 12:29
Patrick Cantlay takes Zozo Championship after late ambush 11:10
John Cooney called into Ireland squad for France clash 10:58
All in the Game: Klopp’s Amsterdam subs don’t go down well 10:00
Here is your handy guide to sport on television this week