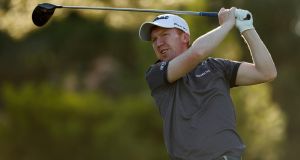 Gavin Moynihan regained his European Tour playing rights after finishing in a tie for 20th position after the gruelling six-round Tour School final in Spain on Thursday.

The 24-year-old didn’t make it easy on himself by ending a run of 34 holes without a bogey by taking a five on the par-four 15th and dropping a shot on the par-three 17th at the Lumine Gold Club in Tarragona.

Moynihan then made a closing five on the par-five 18th to card a level-par 71 and finish on 16 under and in an eight-way tie for 20th position.

The top 25 and ties were guaranteed their card for next year, with Northern Ireland’s Cormac Sharvin missing out agonisingly by just one shot after a final round of two-under 69.

The Ardglass golfer had put himself in position with a birdie two on the 17th but failed to make a birdie on the tough closing par-five as he finished on 15 under.

Robin Dawson carded a level-par 71 to finish the week on three under.

Spain’s Alejandro Canizares, who closed with a brilliant 64, and South Africa’s Zander Lombard (68) finished tied for top spot on 24 under.