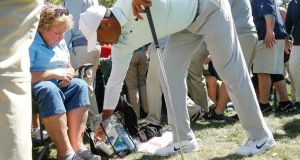 Tiger Woods removes his ball from a spectator’s bag after hitting his second shot on the 18th hole during the second round of the Valspar Championship at Innisbrook Resort Copperhead Course in Palm Harbor, Florida. Photograph: Michael Reaves/Getty Images

A last-hole bogey failed to take the gloss off a superb performance from Tiger Woods as the former world number one continued to impress on the latest leg of his comeback in the Valspar Championship in Florida.

Woods showed flashes of his brilliant best in an opening 70 in what is just his fourth PGA Tour event since undergoing spinal fusion surgery – his fourth back operation in three years – last April.

And the 14-time Major winner surged to the top of the leaderboard for the first time since August 2015 before ending the second round in a tie for second, two shots behind leader Corey Conners.

The 26-year-old Canadian, who started the week as an alternate for the tournament, followed up his opening 67 with a 69, with a double bogey on the fourth – his 13th – his only blemish.

Rory McIlroy will not be back for the weekend, though. The 28-year-old missed the cut after a second-round 73 left him five over par.

With under a month until his latest bid to complete the career Grand Slam by winning the Masters, McIlroy missed a cut for the second time in five PGA Tour events this year.

There were no such problems for Woods. Starting on the back nine of the testing Copperhead Course at Innisbrook Resort, Woods recovered from a wayward drive on the 10th to make par and also parred the next before holing from five feet for birdie on the 12th.

A superb approach to the 13th set up another birdie from a similar distance and, after a run of six straight pars, another gain on the second took Woods into a share of the lead.

Woods enjoyed a stroke of good fortune on the par-five fifth when his hooked drive appeared to hit a cart path and bounce back on to the fairway.

And the 42-year-old took full advantage by finding a greenside bunker with his approach, splashing out to four feet and holing the birdie putt to take the outright lead.

The last time that happened was during the third round of the Wyndham Championship in August 2015 and the last time Woods led outright after a PGA Tour round was after his last win in the 2013 WGC-Bridgestone.

The prospects of the outright lead disappeared with a bogey on the ninth when he pushed his approach right of the green and it finished up in a female spectator’s handbag.

After taking a free drop, Woods caught the pin with his chip but was unable to hole from six feet for par, leaving him to sign for a 68.

“I’m starting to get a better feel for it, I’m finding the rhythm of the rounds, I’m hitting shots, I don’t have a problem posting scores. I’m able to play more feel golf than just trying to figure out how to play golf again.”

Shane Lowry carded a one-under 70 and is one under for the tournament, seven shots off the lead.

Lowry was two over after seven holes but the first of three birdies came at the eighth hole and he added gains at the 11th and 15th holes.

Graeme McDowell made the cut on the number after a one-over 72 left him on three over.

Pádraig Harrington carded a two-over 73 to fall back to seven over and miss the weekend action, with Séamus Power was a shot further back after a 74.