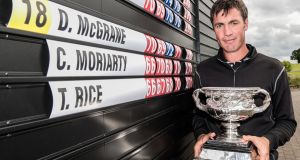 The Limerickman, who opened with a bogey free round of 66, finished three shots ahead of Colm Moriarty (Drive Golf Performance), with 2016 champion, Damien McGrane, finishing in third on six under par.

“I haven’t won anything in ages. The first three days here were as well as I have played for many years although I didn’t putt very well,” said the 39-year-old.

“There was a lot of wind this week, particularly cross winds and I love that, because I can make use of the wind, hold it up and use it to my advantage.”

Rice began the day three shots ahead of nearest rival Moriarty and got off to a flying start with birdies at the first, second, third and fourth. He stretched his lead to six but couldn’t maintain his momentum and Moriarty gradually started to claw back the deficit.

Moriarty produced a stunning eagle at the par five 13th to reduce the gap to just two shots but he never managed to draw level and a bogey at the par three 17th, after he found a bunker off the tee, effectively ended his challenge.

“I kind of felt that after three or four holes ‘right, that makes things less difficult’ but I stopped, I eased up a bit and that was a bad mistake,” added Rice who had never won a PGA in Ireland event until Sunday.

“Colm is too good a golfer to do that. He hit some great shots coming in. He got that eagle and had a couple of other chances.