Shane Lowry upbeat in chasing down those ahead of him 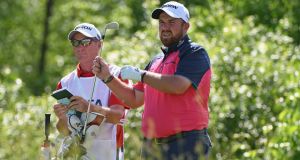 Shane Lowry of Ireland pulls a club from his bag as he prepares to play a shot from the 16th tee during the first round of the 2017 US Open at Erin Hills. Photograph: Ross Kinnaird/Getty Images

Shane Lowry could have been forgiven for thinking it wasn’t to be his day, as one birdie chance after another grazed one tin cup after another in his opening round of the US Open. and especially when a pitch that looked for all the world as if it would drop clipped the flagstick and stayed above ground.

Bogey-free on his round until the seventh, his 16th hole, and compounded by another bogey on his penultimate hole, the 30-year-old Offalyman responded with a sublime wedge to six feet on the 135 yards Par 3 ninth hole for a closing birdie which enabled him to sign for a one-under-par 71.

It left him upbeat in chasing down those ahead of him.

“There are no tournaments won on a Thursday,” said Lowry, using an old adage that is cited frequently in the players’ lounge and on the range. “I would have felt very hard done by if I had only shot even par, so I am very happy with one-under even though the scoring (generally) is quite good. We know it is a US Open and they are going to do something to bring that back.”

Lowry - in tied-29th and six shots behind first round leader Rickie Fowler - found 11 of 14 fairways in a fine exhibition of driving and hit 13 of 18 greens-in-regulation, but failed to capitalise on a number of chances as the greens spiked up a little later in the day.

“It’s nice to go out and shoot a decent score. I did feel quite a bit of expectation on me this week, from myself as well because I am playing so well. There have been times in the past where I have had great practice rounds and warmed up really well and not gone out and done the business. So it was nice to go out and do it,” said Lowry, who will be in the first wave of players in the second round.

“I feel like I know where the clubhead is and where the ball is going to go and it’s nice when it is like that.”

Lowry had played quite beautifully for a large tract of his round, until a poor approach to the Par 5 seventh and then a pulled drive into the fescue on the eighth. “It was hard to keep patient, but I kept telling myself to keep patient. I was quite annoyed with myself (tee shot on 8), and I said to (caddie) Dermot (Byrne) walking up after the third shot on 8, it was completely my fault I just lost the head a little bit, because I had been driving the ball well and picking my targets well and I just didn’t make a good swing there.”

Ireland-based Stephen Kenny can offer FAI welcome stability 06:00
Felipe Contepomi: Lockdown a double-edged sword for the likes of Johnny Sexton 06:00
Sonia O’Sullivan: Running in a bubble as the shoe wars raged 06:00
Joanne O’Riordan: Return to play is fraught with perils and possibilities 06:00
Stephen Kenny undaunted as a bold new era beckons for Ireland 06:00
Here is your handy guide to sport on television this week