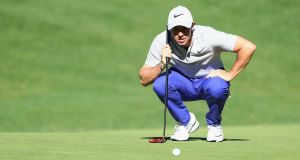 Rory McIlroy of Northern Ireland lines up a putt on the 11th green. He is considering changing putter after another frustrating day on the greens. Photograph; Maddie Meyer/Getty Images

Padraig Harrington admitted he surprised himself after shooting a four-under par first round of 66 at the Travelers Championship to sit just three shots behind leader Jordan Spieth and one shot ahead of Rory McIlroy.

The Dubliner has played precious little golf this year, back surgery laying him up for three months before a freak elbow injury at the start of June saw him miss another 10 days while stitches healed.

But there was little sign on rust at River Highlands in Connecticut as Harrington carded four birdies in a blemish free round.

Harrington’s latest injury came during a coaching session he was hosting, with an amateur hitting him on the elbow, but although it remains “quite sore” Harrington was glad to be back in the swing of things while he already has one eye on the British Open at Royal Birkdale where he won his third Major title.

“We’re close to half a year done now and I’ve only played 21 competitive rounds. You can get that done in a month,” he said. “It’s been a bit of a struggle just getting momentum . . . there’s no substitute for being on the golf course. While it hasn’t been a great year I’ll be happy if I’m ready for the Open.”

McIlroy, making his debut in the Travelers, is one behind Harrington on three under but the former world number one’s putting remains a cause for concern. With 30 putts in his opening round, McIlroy admitted afterwards that he is running out of patience with the TaylorMade Spider he has been using since the US Open and is considering trying a new short stick.

McIlroy’s frustration was borne out of an inability to capitalise on opportunities – he missed five birdie putts from inside 10 feet and even managed to fluff a tap-in. “I come off the golf course a little disappointed with a 67, because I gave myself so many chances,” he explained afterwards.

“Tee to green game is where it needs to be. It’s just a matter of converting the chances I’m giving myself . . . I made a decision this week, I’d give it one more week and see how it (my putter) performed. But again, it’s nothing to do with the putter, it’s mostly what I’m doing.”

Meanwhile, a birdie on the last hole saw Spieth take sole possession of the first round lead in Connecticut.

The former world number one signed for a seven-under 63 on his debut at the tournament, with a bogey on the 406-yard ninth preventing him from securing more than a one-stroke advantage.

The 23-year-old Texan told Golf Channel: “It was a really solid start.

“I got things kicking off early and that helps you walk a little easier and helps with the shots you’re playing throughout the round.

“You don’t feel like you have to take as many chances and I was able to play away from some pins when I was in a little bit of trouble.

“You’re not going to shoot seven-under every round, it’s impossible and I recognise that, so it’s about waiting for my chances to come in the same way we did today.”

West Indies sense victory over England after late surge 19:25
Jack Charlton’s own grievances endeared him to Irish fans 19:01
Capturing Irish hearts and falling asleep in the Vatican: Jack Charlton in his own words 18:11
Championship round-up: West Brom slip up at Blackburn 17:57
Burnley end Liverpool’s hopes of 100 per cent home record 17:08
Here is your handy guide to sport on television this week