Next month’s event at Portstewart is for professionals only 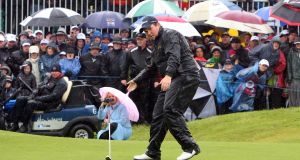 Shane Lowry: “If it hadn’t been for the Irish Open, God knows where I’d be now.” Photograph: Cathal Noonan/Inpho

A subtle change has been made to the entry list for this year’s Dubai Duty Free Irish Open, which is part of the megabucks Rolex Series on the PGA European Tour: for the first time, there will be no amateurs in the field; which means, effectively, there will be no opportunity for anyone to emulate what Shane Lowry did in his life-changing win in the tournament at Baltray back in 2009.

“No more Shane Lowrys,” said the man himself, a little nostalgically. “What can I say about that? If it hadn’t been for the Irish Open, God knows where I’d be now. But, look, the tournament is very big now and to take spots (in the field) away from pros, I think that’s the way they’re looking at it . . . if they don’t have amateurs, they can give a few extra European Tour pros a start in a massive tournament.”

Yet, there is a side of him that also thinks another three players could have been squeezed in.

As Lowry put it, “I don’t know what they should have done. It was the kick-start of my career so, for me, there is no harm in having an extra three-ball of amateurs in the field or three amateurs. I don’t think there is too much wrong with that.”

That Irish Open at Portstewart on July 6th-9th - which has a prizefund of €6.3 million - is obviously a big tournament in its own right by very much on the wish lists of the card-carrying Irish players, with Rory McIlroy, the tournament host, Lowry, Graeme McDowell, Pádraig Harrington, Paul Dunne et al gearing up for a crack at the title.

Each will take different schedules to get there, though. McIlroy, after his missed cut at Erins Hills, and Harrington, returning to competition following his freakish elbow injury when an amateur hit him with his backswing at a corporate clinic, are competing in this week’s Travelers Championship on the PGA Tour while Lowry, McDowell and Dunne are all scheduled to resume tournament duty at next week’s French Open in Paris.

McDowell, a former winner of the French Open, has opted - like Dunne - not to enter pre-qualifying for the British Open at Birkdale and instead to try to claim a ticket there through the spots available in the French, Irish and Scottish Opens where a top-10 finish hands three places to players not already exempt.

Although he missed the cut in the US Open, McDowell - who felt the course set-up didn’t suit his game - remained upbeat: “Generally, I like the way my game is moving and trending. This run of France, Ireland and Scotland is a big pivotal part of my year for me: A, I need to get myself into the Open championship; and B, I need some world ranking points for the rest of the year. It is a good stretch coming up for me. I am looking forward to the summer. I am going to a course in France which I love, and then the Irish Open where I grew up in the area and have played the course many times. So, no panic.”

Keith Duggan: Bubba Wallace tweet shows just how troubled Donald Trump’s mind is 07:00
Ian O’Riordan: Fear and loathing on the Olympic nostalgia trail 06:00
Andy Moran on moving on from a Mayo career that glowed golden to the end 06:00
Frankie Dettori bidding to guide Sceptical to fairytale Grade One glory 06:00
Five of the best deals for Irish golfers at top courses this summer 06:00
Here is your handy guide to sport on television this week