US Open 2017: The three key holes at Erin Hills 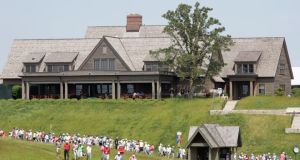 Short, but not so sweet. “Sitting up there on top of the hill with the elements, the wind, it can be pretty exposed . . . there’s a little runoff area with that if their balls hit the middle of the green and it can roll all the way off the green and maybe 10 yards down into some chipping area,” said Steve Stricker of the shortest hole on the course.

The tee is located some 25-feet above the level of the green below and the putting surface slopes from front left to back right. The challenge is to keep the ball on the green, as there is a runoff area that will leave a difficult chip shot. And, then, there are the bunkers: deep, wild-shaped sand traps that protect the green like ogres at a bridge. Anyone finding the traps will have to show their recovery skills to have any chance of saving par. Still, with only a wedge or nine-iron in hand, it will also have its share of birdie opportunities.

This is the hole where Kevin Na took his video to highlight the height of the fescue rough. Although the USGA took to trimming back the rough on a number of holes – the 4th, 12th, 14th and 18th – this hole was let be, so the rough remains as it was and might dissuade players from using the big stick.

The exciting thing here is that the really big hitters will be tempted to drive the green, a small raised green fronted by deep bunkers and with a mound – and rough – to the back. The majority of players, though, will lay-up with a 3- or 4-iron off the tee. Even then, the approach shot to the plateau green will require precision. The green is bisected by a spine which makes it a requirement for players to be on the right level to have any chance for birdie. Get on the wrong side of the ridge, and a difficult two-putt lies in store.

An intriguing finishing hole, with the possibility that the forward tee box will be used at some stage during the championship to add a greater risk-and-reward element. For the most part, it will play as a three-shotter to the green. “It’s exciting. You’ve got an option for an eagle and you’ve got options for a (bogey) six,” said Jordan Spieth of the closing hole.

Regardless of which way the hole is played, the scoring part will inevitably come down to the green which is guarded by deep bunkers front left and features a steep roll-off over the back. “It’s a very difficult green with the prevailing wind because it’s so flat,” opined Spieth. Any miss to the right of the green will also lead to a tough recovery shot to a surface that slopes from front right to back left.

“It definitely is going to make an exciting finish if it is close because there’s two different ways you can play. If you’re coming from behind, you need to press...but the biggest thing is to stay out of the bunkers, try to stay out of the fescue,” said Jason Day.

1 Born to ride, born to win: Sam Bennett, the making of a green machine
2 Leinster look ready to step things up and burn off Saracens challenge
3 Will 'Porridge' Connors now delivering on his massive potential
4 Keith Duggan: Surreal story of John Delaney needs to act as a wake-up call for FAI
5 Let’s face it, Saracens don’t really care that they are rugby’s most hated team
Real news has value SUBSCRIBE