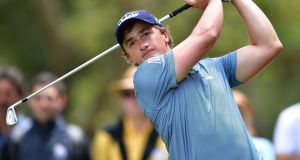 “Would you mind?” asked the young boy. “And my cap as well?”

The flag and the cap were offered in unison to Paul Dunne who, of course, didn’t mind at all.

On this day dedicated to preparation for the 117th US Open here in the Wisconsin heartland, the 24-year-old from Greystones – once  routed through college life in Alabama as part of his golfing education – was as relaxed as they come, and certainly wasn’t one for declining autographs.

He scribbled away and, as tends to happen, there were other requests from fans, young and old, all milling about on this old glacial landscape which is playing host to a US Open for the first time.

“What am I to do?” wondered a marshal aloud, realising the golfer had stopped in the middle of the public pathway. Rules were thrown out the window. She let them be.

This is a fourth career Major championship appearance for Dunne, the highlight – so far – being that unforgettable week at the British Open in 2015. Back then, he was an amateur gate-crashing his way into the big show, flirting with victory and fame as the 54-hole leader. Nowadays, he is professional trending upwards and knowing full well where he wants to go.

Dunne arrived in Wisconsin on Saturday evening, played 18 holes on Sunday and confined himself to nine holes – playing with Shane Lowry – on Monday.

For good measure, his coach, Eric Eshleman, who works at the Country Club of Birmingham in Alabama, is on site. It’s a first, for coach and player to actually work together at a professional event.

“Eric has a busy schedule and it is a long trip out to Europe or Asia or wherever. I go out [to Birmingham] four times a year anyway, I have gone to him rather than have him come to me, when schedules suit.

“It’s good to have him here Sunday through Tuesday and when he leaves I’ll concentrate on scoring and playing and targets and that kind of thing,” said Dunne, who earned a spot in the field through international qualifying at Walton Heath last month.

Things have moved fast for Dunne, just shy of two years since he broke onto the global golf scene on the Old Course at St Andrews and almost touched an audacious destiny. He’s older, wiser, a better player.

“I feel more comfortable, I don’t feel overwhelmed by anything,” said Dunne of his latest appearance in a Major. The three previous have been in the Open. This is new terrain.

“Obviously it is a different type of Major but I have played a lot of American style golf courses in college. I suppose this course is different: it is kind of a mix between an American and it is visually Irish, but it plays American.

“I think it sets up well. I’m hitting my driver great and my putting feels really good. So it is just a matter of getting my irons dialled in the next few days . . . .  if I drive it well and putt well, then everything else would have to be pretty bad for me not to do okay.”

“Do you shoot four under to keep pace? Or if level par is good. You just play it by ear. For now my targets are just to learn my numbers well by Thursday and get more comfortable with flighting my iron shots.  And then from there play the first round trying to shoot the best I can.”

Dunne – runner-up to Edoardo Molinari in the Trophee Hassan on the European Tour earlier this season – has well and truly recovered from the throat infection which affected him at the recent BMW PGA championship at Wentworth. He’s in the whole of his health.

“It’s not miles away. The most confident I was was in Morocco. It was the first time I really felt I didn’t have any chance of going backwards at any point. I just felt I was playing too well. There was probably so many more chances for me to birdie than to get into trouble. But it is hard to tell. Confidence on a Monday and six holes into your round on Thursday could be a different story. But the preparations are going the way I want them to.”

Just two years ago, the closest Dunne got to the US Open was watching it on television. At the time, he was competing in the Brabazon Trophy, the English amateur open strokeplay championship, and he was glued to the television as Shane Lowry and Rory McIlroy made a run for glory and watched as Jordan Spieth and Dustin Johnson won and lost the title. Time has flown. Now, he’s starting out on the same level playing field as they are in the quest for the 117th US Open title.