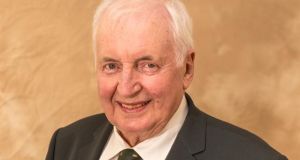 Knock’s Peter Sinclair, who was elected as the 69th President of the GUI at last week’s AGM.

Major changes to the running of the GUI were passed at the annual general meeting in Carton House last week andempowering clubs to direct the future of the Union is chief among the changes agreed.

Affiliated Clubs of the GUI will now be invited to attend and vote upon the appointment of the Board, Trustees and Auditor of the GUI as well as the adoption of the financial accounts, amendments to the Rules of the Union and matters relating to the existence of the Union and the creation of any new governing body for golf.

This move sees the dissolution of Central Council.

Each club will be entitled to send two delegates to the new-look AGM where weighted ballots will be cast by clubs in correspondence with the current provisions for delegate representation in the Constitution, and the method of weighted voting will be replicated at Branch meetings.

Notices of Motion with national relevance will be voted on at all four branch Annual Delegate Meetings. The count of votes at each meeting will be submitted to the CEO for tabulation of the overall outcome.

The first such Annual General Meeting of the Golfing Union of Ireland will take place in February 2018. From 2018 onwards, the appointment of Irish Team Captains at Boys, Senior and Seniors level will be open to external applications with the focus on competency. The GUI Board will appoint each Team Captain.

Knock’s Peter Sinclair was elected as the 69th President of the GUI while John Moloughney was confirmed as President Elect.

Tramore’s Robin Dawson had to settle for his second runner-up finish in a row when he fell to South Africa’s Garrick Higgo, who chipped in at the fourth extra hole, to win the Cape Province Open.

Having finished second in the South African Amateur Open Strokeplay at the same venue last week, the Maynooth University player carded rounds of 69 and 71 on the final day at Kingswood Golf Estate to finish tied with Higgo and another South African, Brandon Cloete, on 10-under-par.

All three returned to the par-five first and made birdie, Dawson holing a nine footer, before Cloete was eliminated at the second extra hole. Dawson and Higgo halved the third extra hole, the first, in birdies with Dawson lipping out from 50 feet for eagle and victory.

But it all ended in dramatic circumstances when they switched to the 210-yard, downhill par-three second for the fourth extra hole, Dawson missed the green right with a five-iron while Higgo flew through the green into deep rough. Dawson chipping to eight feet, it appeared likely that he would have a putt for the title when Higgo hacked his second forward but didn’t make the green.

Higgo spectacularly holed his lobbed-shot for an unlikely par that Dawson couldn’t match despite giving his eight-foot par putt a decent run.

Castle’s Alex Gleeson (69 66 73 71) and Tullamore’s Stuart Grehan finishing just one stroke outside the playoff on nine-under-par. Gleeson led on nine-under-par at halfway and was still in the mix with five holes to go but bogeyed the 14th and par-five 16th for a closing 71.

Grehan improved as the tournament went on by following opening rounds of 72 and 71 with rounds of 69 and 67 on the final day for an eventual share of fourth.

The Island’s Kevin LeBlanc, another Maynooth player, also had a good week and was challenging for the title on eight under par with five holes of his third round to go. He dropped four shots down the stretch for a 75, however, and a final round 72 left him tied for 18th on four-under-par.

Duke’s Leona Maguire clinched the fifth win of her collegiate career when she closed with a one-under 70 to finish in a three-way tie for top spot in the Northrop Grumman Regional Challenge in California.

The world amateur number one was one-over par for the day with five holes to play after mixing bogeys at the first and 10th with a birdie at the ninth. But she finished in style, knocking in birdies at the 14th and 15th before finishing with three pars to share first place with UNLV’s Mackenzie Raim and Florida’s Taylor Tomlinson on four-under par.

It was decided before the 54-hole event that there would be no playoffs in the event of any ties and Maguire took advantage to record her first win of a season that had brought her three third places and a sixth place finish in her previous four starts.

She’d started the week brightly at Palos Verdes Golf Club, carding the first hole-in-one of her college career at the 119-yard 15th en route to an opening 68.

Mehaffey tied for 14th overall on three-over after rounds of 76, 71 and 69 while Leona’s twin sister Lisa closed with her low round of the week, a 79, to finish 86th.

McGrane and Quinlan tops at Portmarnock

Damien McGrane and Stephen Quinlan took the top prizes in the Tuesday Winter Series at Portmarnock Hotel and Golf Links. McGrane carded an impressive, three-under par 68 to win the nett by a huge, five-stroke margin from County Armagh’s Philip Kelly on 73 and Joe Dillon from Headfort on 74.

Quinlan won the gross with a one over 72 with Pure Golf’s Michael McDermott next on 73 and Robert Moran from the Castle on 75.

Muirfield and the members of the Honourable Company of Edinburgh Golfers have begun voting in a fresh ballot on the admission of women as Members of the Club. The postal ballot will be independently scrutinised and the outcome is expected to be announced in mid-March. A vote last year on a resolution to admit women as Members narrowly failed to achieve the two-thirds majority required to change Club Rules.

Voting in favour of the resolution to admit women as Members is recommended, unanimously, by The Captain, Captain Nominate and the Club Committee of the Honourable Company.

Last Year, the Honourable Company of Edinburgh Golfers, who own and play at Muirfield, Gullane, announced that a resolution to admit women as Members of the Club had failed to reach the two-thirds majority required to change Club Rules.

The independently scrutinised postal ballot recorded a vote of 64 per cent in favour of the resolution and 36 per cent against.

Muirfield was removed by the R and A from the list of clubs who are invited to stage the Open championship on a rota basis following that vote.

Headfort’s Rory McNamara tied 26th in the Open Casa Green Golf in Morocco to move up to 21st in the Order of Merit on the EPD Tour. McNamara made two birdies and one bogey in a closing 71 to finish ten strokes behind winner Christopher Carstensen on five under par 211 after rounds of 68, 72 and 71 at Casa Green Golf Club on the outskirts of Casablanca.

Robbie Van West of the Netherlands leads the money list with €7,431 after four starts with the top five at the end of the season earning Challenge Tour status.