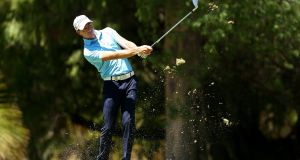 Perth native Rumford carded a third round of 68 at Lake Karrinyup to finish 17 under par, five shots clear of a six-strong group which included former Open champion Louis Oosthuizen.

A further six players finished in a tie for eighth on 11 under, with Australia’s Jake Higginbottom getting the eighth and final bye for Sunday’s first round of six-hole match play contests on countback thanks to a flawless 66.

Eight players were then left to fight it out for the remaining five places in the top 24, with a sudden-death shootout taking place on the difficult par-four 18th.

That left New Zealand’s Ryan Fox and Thai teenager Phachara Khongwatmai to play the 18th for a third time, with the 17-year-old’s par good enough to go through after Fox three-putted.

“It was very difficult because the first time I made bogey hitting a driver from the tee but next time Prom Meesawat talked to me and teach me to hit three wood and (make the) second shot easy,” Khongwatmai said.

“I got lucky that three other players made bogey and I go into next play-off (hole).”

Pre-tournament favourite Oosthuizen, who has dropped just one shot in 54 holes, had earlier carded a flawless 67 with three birdies and an eagle.

“The goal was to make the top eight so I’m happy,” Oosthuizen said. “For the eagle on 13 we had exactly the same number to the front as yesterday so it was a very quick look at the numbers, just a sand wedge in my hand so I was a lot more aggressive and it was ncie to see it disappearing.

“In the match play I’ll need to be a little bit more aggressive, play more towards the pin and see if I can get them really close and try and hit the putts a little firmer to get them there. But overall I am playing pretty good.”