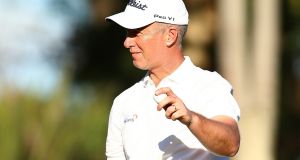 England’s Mark Foster shares the lead after the opening round of the Super 6 in Perth with local Brett Rumford. Photograph: Paul Kane/Getty

Perth native Rumford set the early pace with a six-under-par round that contained just a single bogey, with his effort matched by Foster in the afternoon session.

The pair sit a shot clear of a group of 10 players, although topping the leaderboard is not the be-all and end-all this week as the European Tour embraces a new format. The top 24 players after 54 holes at Lake Karrinyup will contest a six-hole matchplay format on Sunday to determine the champion.

Foster, who lost his card after a disappointing 2016 campaign but got it back at qualifying school, had seven birdies against a single bogey.

Further birdies followed at the first, fourth and fifth to leave the 41-year-old well placed for a tilt at a second European Tour title — 14 years after his only previous success in South Africa.

“It’s a brand new event for everyone so you break your mentalities,” Foster told the European Tour website.

“I’ll have the same mentality tomorrow, and that is obviously to try and get in that 24.

“But if you’re not at your best and you travel this far, sometimes you’re just quiet if you make the cut, but that’s not good here.

“So I think that’s maybe why you’ll see better scoring, because everybody has got to aim for that highest spot and the higher people aim, results tend to get better.”

Rumford, a five-time European Tour winner who like Foster lost his card last season, made four birdies in an outward 33 and added further gains at the first and fourth before completing his scoring from eight feet on the seventh.

“No stretches of brilliance, just a consistent round of golf, controlled the ball pretty much how I wanted it most the day.”

Dinwiddie finished two positions above Rumford in the Race to Dubai last season but that was not enough to maintain full playing privileges and he recovered from an opening bogey with seven birdies before dropping another shot late on.

Last year’s Perth International winner Louis Oosthuizen opened with a three-under-par 69 to sit in a tie for 24th but world number 11 Alex Noren could only manage a two-over 74.