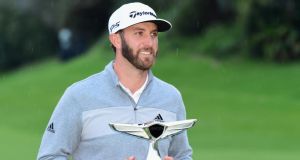 Dustin Johnson is the new world number one after his victory in the Genesis Open. Photograph: Harry How/Getty

Dustin Johnson is the world number one for the first time after winning the Genesis Open.

The US Open champion took the lead in the second round and never relinquished it, ending the weekend 17 under par and winning by five shots at Riviera Country Club.

Johnson needed to win and hope Jason Day finished lower than a three-way tie for third to top the rankings — and the outgoing number one could only manage a tie for 64th after finishing two over par.

The leaders had to complete two rounds on Sunday, following storms on Friday.

Johnson took to the course on day four with a one-shot lead but was six strokes clear after the third round.

The 32-year-old started with a birdie on the first and picked up further shots on the fifth, eighth and 12th before birdieing the last three holes for a seven-under 64.

That took him to 17 under for the tournament — equalling the 54-hole record.

The 72-hole record of 20 under was well within his sights after he gained shots on the first, second and sixth in his final round, but a first bogey in 50 holes dropped him back to 19 under at the turn.

He also recorded back-to-back bogeys on the 15th and 16th but the damage had already been done by then and he made sure of a PGA title for the 10th successive season with pars on the 17th and 18th.

“It’s obviously a big bonus to finally get to that number one spot. I’m very proud of myself and my whole team who have supported me.

“It’s going to push me to work even harder.”

Day needed something miraculous on Sunday to preserve his ranking but a four-over third round ended his hopes of a high finish.

The Australian was level par in his last round — an eagle and two birdies cancelled out by four bogeys — as he ended 19 shots back on his replacement at the top of the rankings.

Thomas Pieters made a late charge to finish second alongside American Scott Brown — the Belgian’s final-round 63 equalled the best round of the week and took him to 12 under for the tournament.

England’s Justin Rose was in a four-way tie for fourth after ending with a 68 while Scotland’s Martin Laird was a shot behind in eighth.