The new event on the European Tour incorporates strokeplay and matchplay 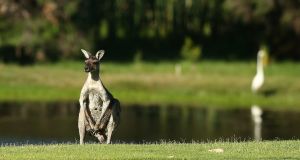 A kangaroo looks on from the side of the third fairway at Lake Karrinyup Country Club in Perth, Australia. Photograph: Paul Kane/Getty Images

Rumford added a second round of 65 to his opening 66 to finish 13 under par, two shots ahead of compatriot David Bransdon, whose flawless 64 was a shot outside the course record at Lake Karrinyup.

Steven Jeffress was a shot further back after a 66 as Australian players filled seven of the top nine places.

Under the new tournament format, the field will be cut to 24 players ahead of Sunday’s match play stage, with Rumford keen to be part of the top eight who will receive a bye in the first round.

“Oh, 100 per cent,” said the Perth native and five-time European Tour winner, who lost his card at the end of last season. “That’s one less lottery round you have to deal with, isn’t it?

“It’s a huge bonus qualifying inside that top eight. It’s definitely something I am thinking about.”

Pre-tournament favourite Louis Oosthuizen, who won the Perth International at the same venue last year, is six shots off the lead after adding a 68 to his opening 69.

“I’m trying to play pretty safe off the tee and give myself good iron shots in,” the former Open champion said. “I feel pretty confident with my iron play at the moment and just struggling to get a good roll on the greens.

“My pace is off, I’m short all the time or miss it on the low side so I need to see if I can get a better pace on it. I’ve had two days so I can’t still be moaning about it, I’ve got to figure it out.”

Noren, who won four times in 11 events following his early exit at Oakmont, added a 69 to his opening 74, but missed out by a single shot as the cut fell at two under par.

England’s Mark Foster, who shared the first round lead with Rumford, carded a 73 to fall eight shots off the pace.