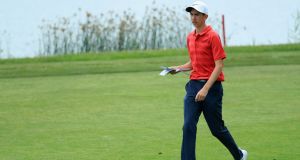 At just 15 years old, Co Down’s Tom McKibbin should be looking forward to the start of the school holidays but instead he’s making his debut on the European Tour and impressing along the way.

McKibbin – who comes from Holywood Golf Club which is also home to Rory McIlroy – opened with a round of 71 for one under par and a share of 39th place, just five off the lead held by Sweden’s Oscar Lengden at the Shot Clock Masters in Austria.

The 15-year-old recently won the Junior Honda Classic and the Doral Publix Jr Classic Orangebowl Championship in the United States and is making serious waves in the amateur game where he represents Ireland at under-18 level.

Four birdies on the way out meant he completed his first nine holes at a professional event in just 33 shots before a double bogey at the 11th knocked him back to one under, the score at which he would finish.

Dubliner Gavin Moynihan matched McKibbin’s efforts with a round of 71 while Ruaidhrí McGee could only manage a 73.

Moynihan is still yet to make a cut on the European Tour since earning his card last November although his recent win at the Golf Sixes event, alongside Paul Dunne, was a major boost.

The event – held at Diamond Country Club in Atzenbrugg – is the first in professional golf to introduce a shot clock.

A digital clock mounted on a buggy follows each group and each player will has 50 seconds to take their shot if they are first to play, including tee shots on par threes, or 40 seconds for tee shots on other holes or when second or third to play while players incur a one-shot penalty for each bad time incurred. Remarkably, however, none were handed out with some groups finishing in less than four hours.

Despite his 54 years of age, the quick play didn’t perturb Miguel Angel Jimenez too much as he carded an opening round of 67.

“I think I’ve never played that quick before,” Jimenez, 54, said. “I feel like I was running a marathon there but it was good.

“You hear when the time starts and know you have 40 or 50 seconds but I know it’s plenty of time. The most important thing is to be ready when it’s time to play, because if not it’s going to catch you.”

The experiment has also gone down well on the other side of the Atlantic, with Billy Horschel writing on Twitter: “Loving this shot clock deal on the EuropeanTour.

“Amazing how fast rounds go when players play within the rules. And guys are still playing great golf. Shocking!! ....wish we had something like this on the PGATOUR.”

1 David Clifford sends everyone back to their corners unbeaten
2 Six Nations: A 21st-century tournament that saw Irish rugby come of age
3 Six Nations: Ireland are contenders but England still the team to beat
4 Sublime 67 leaves Rory McIlroy right in the mix at Torrey Pines
5 Mike Catt hopes to have Irish backs purring in Six Nations
Real news has value SUBSCRIBE