Leona Maguire just three off the lead on professional debut 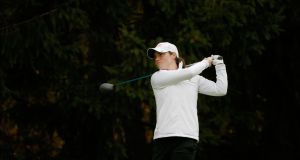 Leona Maguire opening her professional career with a round of 69 at the ShopRite LPGA Classic on the LPGA Tour. Photo: Getty Images

Ireland’s Leona Maguire got her professional career off to a perfect start with a birdie at the very first hole of her pro debut at the ShopRite LPGA Classic in New Jersey and she went on to post a round of 69 for two under par and a share of 27th place.

The Cavan golfer – who has just joined the paid ranks alongside her twin sister Lisa after setting numerous amateur records during her time at Duke University – will go into the weekend at the $1.75 million event just three shots off the lead held by Laura Diaz and Anna Nordqvist at five under.

Maguire started at the 10th with a birdie before adding another at the 16th. She went on to make a first bogey of her professional career at the 18th before rebounding with a birdie at her 12th hole in an event which features five of the current top-10 on the Rolex world rankings.

From there she would par her way in for a very impressive opening round as a professional.

Her sister, Lisa, did not enjoy a similar debut as she struggled to a round of 84 which didn’t include a single birdie.

The Maguire sisters can receive a limited number of sponsor’s exemptions on the LPGA Tour this season while Leona has status on the secondary Symetra Tour.

The 23-year-old twins move on to professional careers after stellar campaigns as amateurs which included Curtis Cup and multiple championship successes around the world. Leona dominated the world amateur rankings in recent years – holding the record for the most weeks at number one (of 135 weeks), breaking the record of Lydia Ko in the process – and won 10 collegiate tournaments in her time at Duke, while Lisa is a former European strokeplay champion.