Colin Byrne: US Open memories of a brutal Shinnecock Hills 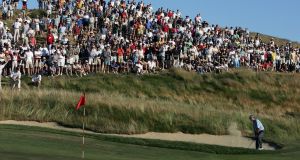 Retief Goosen plays a bunker shot on the 14th hole during the final round of the 104th U.S. Open at Shinnecock Hills Golf Club in 2004. Photo: Jonathan Ferrey/Getty Images

They say you should never look back. Of course there are always exceptions and I found myself in that reflective mood in New Orleans in April as I bumped into Retief Goosen on the putting green.

We chatted about family matters, then slipped into a bit of nostalgia by recalling his victory in the US Open at Shinnecock Hills on Long Island 14 years ago. All that time, but the memory, once flared, could recall a lot of the detail of a final round that was to be a landmark for the USGA. Future venues have since been set up in a more sensible fashion.

I can picture the scorched earth that the course had become by hot weather and a lack of common sense by those setting up the golf course. The authorities were on self-imposed irrigation restriction that week to the extent that the course became farcical.

I watched our final round playing partner Ernie Els practice putt to one hole before we went out and ending up at a hole on the other side of the green. We caught each other’s eye and exchanged bemused smiles, in anticipation of the challenge facing us all in the final round of the 104th US Open.

I had waited, in a state of confusion, in a somewhat secluded area near the locker room where Retief was to present himself for his attempt at a second US Open title. Despite advances in our circumstances as bagmen over the decades, the locker room is still a no go zone for us ‘toters’ in America. I watched the scoreboards coming back to base as the early starters completed their arduous rounds. There was an abundance of scores in the 80s with the odd high 70s thrown in. I felt my Adam’s apple protrude dryly as it would when you witness something utterly shocking. ‘What the hell is going on out there?’ I wondered. Carnage on the golf course, I surmised.

I calmed by reminding myself that my boss had played impeccable golf for the first three rounds and had already won a US Open. I delved further for reassurance, noting that the type of shots that he had played in the opening rounds showed not only an innate talent but the workings of a superior golfing brain operating on high alert. He was able to select and execute the correctly shaped shots continuously in order to hold the greens that had resembled badly laid terraces. This left very little chance of being able to stop a ball on them without constant understanding and perfection. Shinnecock USGA 2004 style showed what a master Goosen was of the near impossible, golfing sorcery on treacherous greens.

There was the understanding but this was coupled with a Zen-like calm and control when the rest of the field seemed to be in a state of chaos. Being a non-American, Retief had flown relatively below the radar of attention despite leading. For the final round the radar had found him. There is always an added intensity when you are trying to win, with a Major this is amplified. I remember simply trying to get off each tee ahead of the last group entourage that amassed for the final denouement was a real challenge.

Then there was the crowd; mouthy and mean. Ready to hurl abuse at the foreigner on top of the leaderboard and heap excessive praise on their golden boy challenger Phil Mickelson. There are two things that can happen to you when you hear constant abuse being hurled at you; you can weaken an let it devour you, or you can gain strength from it and feed off the insults and use it as a weapon of forbearance. So when Retief had ‘golf aficionados’ sticking their face in his saying “three-putt, make it interesting” and “all yours to lose” amongst other comments that can’t be printed in a respectable publication, his inner strength hardened to the point of invincibility.

He didn’t play as well as he had in the first three rounds but he putted better than he had ever in his life. What a great time to do so. Just 24 putts by the time he had simply doffed his hat more forcibly than was his wont as his final putt dropped and his second US Open title was secured and the crowd erupted to muted and audibly disappointed applause. Their favourite Phil was vanquished and the victor had gracefully and elegantly held his composure to give the finest performance of his professional life in how to face force and hostility with finesse and fortitude.

I relish the opportunity to return to Shinnecock Hills with my current boss Rafa Cabrera Bello who is heavily armed with Iberian fortitude and talent, enough to combat the New York noise and the challenges that the 118th US Open can throw his way. I will not be looking back but a flood of warm memories are inevitable. I hope my boss of 14 years ago is there too. He will attempt to qualify as the USGA did not feel like he deserved a nostalgic exemption for his formidable feat of 2004.