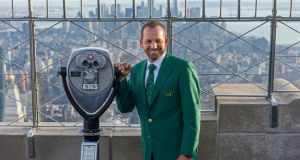 Sergio Garcia stands on the 86th floor of the Empire State Building in New York after winning The Masters. Photo: Craig Ruttle/AP

After finally burying the majors demon that haunted his career for nearly 20 years at the Masters, Sergio García now has his sights set on the British Open title.

After four runner-up finishes at majors, the Spaniard finally won one of golf’s showpiece titles on Sunday at Augusta, beating England’s Justin Rose in a play-off.

“It’s better late than never,” García said in an interview with Radio Marca. “I have to continue on the same path. I hope this is not the last.

This year’s Open takes place at Royal Birkdale in July. The Spaniard has two second-place finishes in the event, at Carnoustie in 2007 – when he lost in a play-off to Pádraig Harrington – and Hoylake in 2014, when he tied behind Rory McIlroy alongside Rickie Fowler.

García played in 74 majors before finally winning one, with victory coming thanks to a 12-foot birdie putt at the first extra hole on Augusta’s par-four 18th.

He said: “I hit it where I wanted to. I didn’t ask my caddie’s opinion because the putt fell towards the left. In the five previous holes I had struck the ball very well. I knew there was the possibility of making a birdie in the play-off.“

García’s victory came on what would have been the 60th birthday of his late hero Seve Ballesteros, who died of brain cancer in 2011. Another idol, José María Olazábal, also won at Augusta.

“I dedicated the victory to Severiano. I was able to win in the same place that my two idols had done. Olazábal sent me a very nice message in which he told me that he loved me and that I should have a lot of confidence in myself.”

Before the Royal Birkdale event comes the second major of the year, the US Open, which starts on June 15th at Erin Hills.