A former member of the NYPD, his eyesight deteriorated working in the wake of 9/11 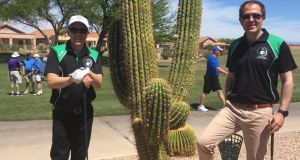 Paul McCormack (left) with guide Karl Pierce at the US Blind Golf Open.

Rory McIlroy’s pursuit of a maiden US Masters title and a career Grand Slam goes on after he fell short again at Augusta, finishing tied for seventh place as Sergio Garcia broke his Major title duck.

However, one Irish golfer did enjoy a major success Stateside on Sunday – and he also got to don a green jacket.

Nearly 2,000 miles away from the azaleas of Georgia, in the harsher setting of the Arizona desert, Paul McCormack was retaining his US Blind Golf Open title.

It was a comfortable win for the Howth resident at Torres Blancas Golf Course in Green Valley, as he shot rounds of six and 11 under par to win the competition by four strokes.

Originally from Ballybofey in Co Donegal, McCormack emigrated to the US in 1986 and went on to serve 20 years in the NYPD, before moving back to Ireland with his family in 2010.

During his time with the police force he was heavily involved in the work which took place at Ground Zero following the attack on the Twin Towers on September 11th, 2001.

His work in the wake of 9/11 resulted in the deterioration of his eyesight, and in 2010 he retired from the force after being “injured in the line of duty.”

McCormack is a B2 category golfer, meaning his vision is less than six per cent. He had gone 15 years without playing in a golf tournament – until he took part in and won last year’s US Open.

After his second victory the back-to-back champion said: “It was very exciting stuff, it was nice to be representing Ireland and it’s nice to win for Ireland.

“It’s great for people that have visual impairments or blindness, it’s a great outlet for us to express our sporting prowess.

“Some of us were big sports people and when you get hit with a visual impairment or blindness it can be really devastating, but organisations like the Vision Sport Ireland and Irish Blind golf have been a tremendous outlet for me since I joined, to be able to compete in tournaments again and to compete in sports.

“I never thought I’d be able to represent my country , so to be able to do that in anything is very exciting and it’s a big honour. Like I said last time, I never thought I could do it, but we were over with green Ireland jackets and people were asking us ‘are you coming from the Masters guys?’ It was very exciting. We had our green jackets on and it was really cool getting the prize.”

McCormack, who plays off a handicap of 34, was aided by his friend and caddy Karl Pierce, who guides him around the course.

“Karl is my caddy – my guide, we call it – and my coach,” McCormack said, “if you’re visually impaired you can’t see down the fairway, so I’ll hold my club up and he’ll say ‘that’s the line to take right there, when you’re teeing off’ and I’ll get up and hit the ball.

During his time in the United States, McCormack featured for the New York Gaelic football team – although he didn’t make it into the panel for the Connacht championship.

However, his participation in GAA came to an end in 2000, after he donated a kidney to his sister – but through Irish Blind Golf he found a route back into competitive sport.

And he will be looking to add the British and Irish Open titles to his US Open success later this year, with the two tournaments being held in Ireland.

1 Reality Bites – Tales from the new normal: Caitríona Cormican
2 Nicholas Quinn: ‘Swimming became how I dealt with grief’
3 A beautiful, happy accident - Moneyball is the best sports movie ever
4 James McClean still failing to learn his own online history lesson
5 Ian McKinley: ‘You do take for granted the simple things in life’
Real news has value SUBSCRIBE