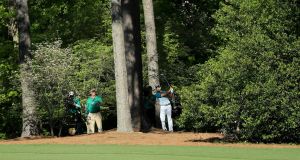 Sergio Garcia of Spain plays a shot from the pine needles on the 11th hole during the final round of the 2017 Masters Tournament at Augusta National Golf Club. Photo: Andrew Redington/Getty Images

Traditionally the two toughest scoring holes at Augusta National, Garcia had heart-stopping moments on each of them. He suffered bogeys on both, but the damage could have been much worse.

On the 10th, the hole where Rory McIlroy’s challenge imploded back in 2011, Garcia kept the driver in his bag and opted to use a 5-wood off the tee for safety and positioning. His execution was poor. “I came out of it,” he conceded.

The upshot was that Garcia was left with a 236 yard approach down the hill to the green. “It was really, really far.”

The Spaniard discussed yardage and strategy with his caddie, South African Glen Murray, and selected a four-iron. But it was poorly struck, pushed right and finished in the pine straw. Fortunately for him, it missed a large azalea bush by a small margin. Garcia’s pitch rolled on by the pin and he two-putted for bogey.

On the 11th, Garcia returned to his club of choice off the tee but pulled his driver left into the pine straw and was partially blocked by a tree. Fortune favours the brave, however, and Garcia’s well-struck eight-iron averted potential disaster. It finished in front of the green but left Garcia with a long putt. “It felt like 2,000 feet,” quipped Garcia later, adding: “It was one of the longest putts I’ve ever had at the Masters.” It resulted in another bogey.

On the 13th, Garcia hit a risky tee-shot, but one he’d played for the first three rounds. It involved playing a cut drive over the trees but, this time, the ball clipped the limb of one of the towering pines and the ball dropped down into an azalea bush. He had no option other than to take a penalty drop and, playing off the pine straw (an allegation from an armchair viewer that the ball had moved as Garcia reached for a pine needle after making the drop was swiftly discounted by rules officials), he laid up short of the tributary guarding the green.

His pitch to 10-feet still left him with a tough putt. “More than anything, that putt (was important), because I hit some decent putts earlier in the round and didn’t make them and started doubting my reads a little bit.” But he made it for par and Rose missed his birdie effort from a similar distance. Garcia had audaciously matched the Englishman, and it was a momentum shifter.

Two strokes behind standing on the 14th tee, Garcia bombed his drive down the fairway and, with 150 yards to the flag, selected a nine-iron for the approach shot into the breeze. It was beautifully struck, to five feet, and he sank the birdie putt. One back.

On the par five 15th, Garcia’s driver again did its job. Left with 189 yards to the pin, with a helping breeze, Garcia took the eight-iron in his hand and hit “one of the best shots I hit all week” to 12-feet. Like a matador sensing his moment, Garcia rolled in the eagle putt. Rose birdied. Level again, only for Rose to take-and-give in the next two holes, the Englishman birdieing the 16th but bogeying the 17th from a greenside bunker.

In the playoff, Rose handed the initiative to Garcia with a wild pushed drive into the trees where the ball rebounded back off trunks and limbs to settle in the pine straws. To Garcia’s credit, he didn’t need any help as he closed in some style: a drive down the right side of the fairway was followed by a nine-iron approach from 145 yards that settled 14 feet from the hole. Of course, he sank it.

1 Stephen Kenny replaces Mick McCarthy as Ireland manager
2 Matt Williams: The economic earthquake for European rugby is coming
3 Simon Zebo: ‘It’s been tough not being able to put my hand up to play with Ireland’
4 Pat Critchley: ‘You teach or coach the person first and the subject or the game second’
5 Understated Stephen Kenny offers Ireland a ray of light
Real news has value SUBSCRIBE