After thrilling duel on Masters back nine Sergio Garcia happy to join major winners while Justin Rose disappointed with loss but confident his time will come at Augusta National. Video: Reuters 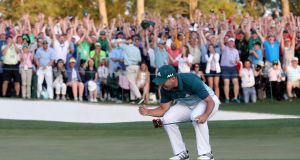 One looked towards the heavens for his inspiration; the other sought it from within his own heart.

And, as both contrived to produce a duel for the ages in this 81st edition of the US Masters tournament, Sergio Garcia – so often the fall guy when it most mattered – ultimately outdueled Justin Rose to claim a breakthrough major title at the first hole of a sudden-death play-off.

After Garcia and Rose posted rounds of 69 for 279, nine-under, which left them glued together, all of three shots clear of third-placed Charl Schwartzel, the pair returned to the 18th hole for the first hole of a play-off. Rose’s drive, though, was pushed right into the trees and finished on the pine straw. He could only punch it forward some 50 yards, barely beyond Garcia’s own drive.

From there, it was advantage Garcia and – 10 years on from losing a play-off to Padraig Harrington for the claret jug – the Spaniard finally won his Major, a green jacket. He sank a 12 footer for birdie on the first play-off hole, although requiring only a par after Rose’s bogey.

On what would have been the 60th birthday of the late, legendary Seve Ballesteros, Garcia had hoped for an alignment of the stars in his quest to finally fulfil his destiny. It happened, but only after a journey that twisted, turned and slithered until Garcia’s time arrived.

Typically for the matador, this was an engaging contest of swinging emotions.

Garcia’s world seemingly crashed down around him in and around the turn, as he sought to find himself. A three-stroke lead after five holes brought him into a false comfort zone that was overcome by Rose’s majesty and, if the truth be told, some of the Spaniard’s own failings, most notably in errant shots on the 10th (his approach left short beside bushes) and the 11th (pulled left off the tee into the trees) which led to back-to-back bogeys.

On the 13th, Garcia rescued a wonderful par after having to take a penalty drop when – on a risky tee-shot that clipped the trees – his ball finished in the azalea bushes.

It was at that time that Garcia sought to take a leaf out of Roses’s book and to look after matters himself. And it was then that the mano o mano combat moved up to a new, high-decibel level which transformed the duel into a truly memorable one, with Garcia ridding himself of the failings that had threatened to derail him.

Standing on the 14th tee two strokes behind, Garcia, digging deep, rediscovered his wonderful shot-making. A drive and nine-iron approach, using the slope of the green to its full, set up a six feet birdie putt. He sank it. Even better was to come on the Par 5 15th, where Garcia’s 8-iron approach from 177 yards clipped the flagstick and he rolled in the eight footer for eagle. Rose kept his own composure to sink his eight footer for birdie. They were tied on nine-under.

On the 16th, where an hour earlier Matt Kuchar had used the green’s slopes for a hole-in-one, Garcia’s tee shot used those same contours only to settle six feet behind the pin. Rose’s tee-shot was arrow straight, finishing eight feet shy. He sank his, Garcia – timidly – missed. Rose 10-under; Garcia nine-under.

The twists and turns knew no end. On the 17th, Rose pushed his drive to the right, playing his approach from the first cut of rough; Garcia’s drive was true and sure, which – having watched his opponent put his approach into a greenside bunker – allowed him to have a wedge in his hands for the approach. Rose, though, failed to save par from the sand and Garcia’s two-putt par put them level again.

On the 18th, Rose – somewhat fortuitously – saw his 8-iron approach kick back towards the hole; 10 feet away. Garcia responded with a majestic wedge, to six feet. Rose missed . . . Garcia’s moment of destiny rested on one putt. In his own hands. He missed it right. The playoff prolonged the drama.

Others, unexpectedly, had imploded. Jordan Spieth was one; Rickie Fowler another. Each of them fell by the wayside to leave centre stage to the two main protagonists. And what a show they produced.

For Rory McIlroy – seeking to push the last piece of the jigsaw into place in his on-going quest for the career Grand Slam – a final round 69 for 285, three-under, moved the Northern Irishman into a top-10 finish for the fourth successive year but some distance away from where he truly wanted to be.

With his marriage pending – at Ashford Castle in just two weeks time – McIlroy will be taking time out from tournament play. His build-up had been disrupted by a rib injury which necessitated a six-weeks break following the South African Open, but he didn’t apportion any excuse to that.

“I don’t think it was lack of competitive rounds. I played a light schedule up until this tournament for a few years in a row, I wasn’t planning to this year, it just happened to be that way. It’s another major and another missed opportunity. But I’ll move on and focus my attention on the US Open (at Erin Hills) coming up (in June),” said McIlroy.