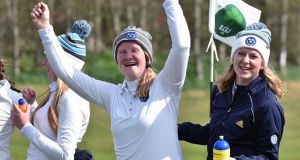 Lindblad conquers the field at Roganstown

Sweden’s 16-year-old Ingrid Lindblad won the Irish Under-18 girls’ open strokeplay championship at Roganstown Golf Club in Dublin on Sunday. Lindblad carded rounds of 71, 72 and 70 for level par total of 213 to win by four shots from Dutch girl Kaylee De Jonge who finished on 217 after rounds of 75, 72 and 70.

Best of the Irish in a strong international field was Annabel Wilson from Lurgan, who tied for third place with Scotland’s Jillian Farrell, England’s Jessica Hall and Lea-Anne Bramwell from Wales. The quartet finished on 219 with Wilson signing for rounds of 69, 79 and 71.

Lindblad opened with eight straight pars in the final round and after 12 holes was three shots clear of Bramwell and de Jonge, who had fired a final round 70 to move to four over. A birdie three on the 16th and two pars to finish was enough for a fou-shots win for the Swede.

Loccal knowledge proved vital as the home pair Jack and Robbie Pierse clinched a two-shots win in the Dublin Scratch Foursomes at Grange GC. The brothers, nephews of amateur international Arthur Pierse, combined for a two-round total of two-under-par 140 for a clear win over Dundalk’s Aaron Grant and Caolan Rafferty. The Island’s Jake Blake and Jonathon Quinn took third place on countback with 145.

Duke University junior Leona Maguire has been named the ACC Women’s Golfer of the Month after winning one March tournament and placing among the top six finishers in two others.

In the three tournaments against some of the best collegiate golfers, Maguire carded a 69.89 stroke average for 10-under-overall. Maguire won the LSU Tiger Golf Classic with rounds of 67, 68 and 71, finished second at the Gator Invitational with rounds of 71, 67 and 69, and then tied sixth at the Darius Rucker Intercollegiate with three straight rounds of 72.

Maguire did not have a round over par during the month of March. With the win at LSU, she moved back to number one in the latest Golfweek Individual rankings. Her LSU win also gave her six individual victories over her three years at Duke, which ranks tied fifth overall in Blue Devil history.

Maguire earned the ACC accolade for the fifth time over her Duke career and the first time this season.

Ireland’s Stuart Grehan and England’s Emily Toy won the men’s and women’s titles respectively at the R and A Foundation Scholars’ Tournament over 54 holes at St Andrews, two over the Eden Course and the final round over the Old Course.

The Scholars tournament is contested by university students who receive financial assistance to meet the expenses of playing competitive amateur golf.

When the first and second in the men’s tournament at the start of the final day, John Murphy (Maynooth) and Scottish students’ champion Laird Shepherd (Stirling) crashed to closing rounds of 78 and 79 respectively, Grehan took full advantage to triumph with rounds of 67, 68 and 72 for a nine-under-par aggregate of 207.

Emily Toy laid the foundations for her success in the women’s tournament with nine-birdie first round of five-under-par 68 over the Eden Course.

She started the final round over the Old Course in second place behind the defending champion Chloe Ryan (University College Dublin) but Ryan, like the overnight men’s leaders, failed to resist the last-day pressure. She had rounds of 71, 68 and 77 for a total of 216, good enough to tie with fellow Irish international Sinead Sexton (Stirling) (72-71-73) for second place but not good enough to hold off the last-day surge by Emily Toy who won by two shots with a 10 under par total of 214, made up of rounds of 68, 72 and 74.

The PGA has honoured nine of the founding members of the Women’s Professional Golfers’ Association (WPGA) whose foresight has resulted in women golfers playing for six-figure prize purses on an international stage.

The WPGA sowed the seeds for the Ladies European Tour (LET), which has seen the likes of Laura Davis and Annika Sorenstam become as famous as their male counterparts. It was formed in 1979 and the nine PGA Members who played a part by competing in it and getting it off the ground have been granted honorary membership of the Association.

All have remained PGA Members since those pioneering days, as have Beverly Lewis and Mickey Walker, two other founding members of the WPGA who have already been made honorary PGA Members.

The three-handicapper returned a total of seven under par net for his best three cards over the series to edge out Dundalk’s Clem Walshe.

Former European Tour player Gary Murphy won a tight battle for the gross prize by one shot from Co Louth’s Gerard Dunne at three-under for the series.

In the final outing Forrest Little’s Keith McCabe (4) was the clear winner with a fine 71. He beat Stephen Dixon (1) from The Island by two shots with Murphy winning the gross with a 73.

Ballymena’s Dermot McElroy closed with a 69 to finish tied for second in the HotelPlanner.com PGA EuroPro Tour Q-School and Frilford Heath and earn Category 3 membership for 2017. The former West of Ireland champion finished tied with James Frazer and Will Enefer on eight-under-par, two shots behind Scotland’s Jamie McLeary.

The 2017 HotelPlanner.com PGA EuroPro Tour season gets underway with The Lookers Championship at Close House from April 26th-28th.

Jack Davidson and Robin Dawson have been invited to join the Great Britain and Ireland squad which is being considered for the 46th Walker Cup match against the United States at Los Angeles Country Club in September.

Dawson, an R&A Foundation Scholar, was runner-up in the European Nations Cup individual event and the South African Stroke Play Championship. He also played in the Cape Province Open in South Africa where he finished third. Dawson is the sixth Irishman in the squad.