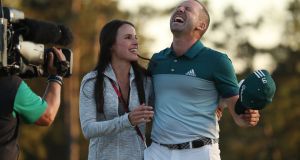 Sergio Garcia with fiancee Angela Akins after winning the US Masters in a sudden death playoff over Justin Rose on Sunday. Photograph: Andrew Gombert/EPA

Time is an entity worth embracing as a friend, rather than an enemy. In the gathering dusk of Augusta National Golf Club on Sunday evening, with Sergio Garcia wearing a slightly too big green jacket as the newest of all the Masters champions, the Spaniard was on the receiving end of the kind of worship from the patrons (mainly American) that confirmed a new measure of respect, a metamorphosis from pantomime villain to superhero.

Remember, just last October, and not for the first time, Garcia was the butt of derogatory reminders at the Ryder Cup in Hazeltine about his place in the game. As he quipped – with a deadpan face – after Europe’s defeat, “I definitely know I haven’t won a Major”.

Now, after two decades of trying, and the subject matter to forensic analysis of seemingly not having the “bottle” for it when thrown into the white heat of combat, Garcia had the last laugh on many of us.

Over time, he has matured; and, for sure, it was entirely fitting that, at a time when Garcia had his back against the wall on that homeward journey of the final round, it was then that his true fortitude should surface with feats of escapology and sublime shot-making and, would you believe?, even putting that was worthy of any champion of the past. Dare we say it, even Seve-like?

The putter in his hands is worth highlighting, for it was only at the WGC-Dell Matchplay last month that Garcia put the TaylorMade Spider Tour Red mallet – a putter designed with the help of Jason Day, and named after the redback spider found in his native Australia – into his bag. It is the same club used by Day, Dustin Johnson and Jon Rahm, and, apart from its feel, it gives players a degree of forgiveness when making the stroke.

It certainly worked for Garcia, a player who once sought to find a cure for his putting woes with the old long-handled putter and who had switched from one to another of the short version in recent years.

The Spider Tour Red was a tool that worked under pressure, from that par putt on 13 to the eagle putt on 15 to the birdie putt at the first play-off hole. Over the 73 holes of the tournament, Garcia had only one three-putt and averaged 1.65 putts per green in regulation.

The putter was only one of 14 clubs in Garcia’s bag, but, on this occasion, it was his head – a composure that hasn’t always been evident – that was his truest friend.

In his 74th Major, of which he had previously had 22 top-10s and of course lost a play-off to Pádraig Harrington for the Claret Jug at Carnoustie in 2007, Garcia had built up experience but also scar tissue. That he used the experience to finish the duel with Justin Rose only showed how he had learned the lessons of the past. As the saying goes, a mistake is only a mistake if you don’t learn from it.

Afterwards, Garcia was asked what he was most proud of? “Definitely,” he responded, “[the] demonstration of my character, and my mentality. You know, how positive I stayed even when things weren’t going that well on 10 and 11.”

Such fortitude hadn’t always been apparent when it mattered most in Garcia’s historical quests for Major titles, although there is a more measured calmness – on and off the course – about Garcia these days, with the influence of his fiancee Angela Atkins, a former college golfer and ex-Golf Channel reporter, given credit for such a demeanour.

“I think the problem is, because where my head was at sometimes, I did think about, ‘am I ever going to win one?’ I’ve had so many good chances and either I lost them or someone has done something extraordinary to beat me. So it did cross my mind. But lately, I’ve been getting some good help and I’ve been thinking a little bit different, a little bit more positive. And kind of accepting, too, that if it for whatever reason didn’t happen, my life is still going to go on. It’s not going to be a disaster. But it [has] happened,” said Garcia.

“I’m not going to lie; it’s not the golf course that I’m most comfortable in, because I’ve become more of a fader than a drawer of the ball, and this golf course is asking you to hit a lot of draws. But I knew that I could still work it around if I just accepted what was happening.” That fresh attitude certainly played a big part in his breakthrough Major, at the age of 37 years.

A duel takes two to tango, so to speak, and Rose’s role as the protagonist added hugely to the drama. A winner of the US Open at Merion, the Englishman’s quest for a second career Major title – when he carried a two-shot lead on to the 14th tee – was to be a frustrating one, although he epitomised class and sportsmanship when the deal was done.

“I think we’ve always known that Sergio is kind of an emotional-on-and-off-the-golf-course kind of guy, and when it’s all clicking, he’s one of the best in the world. I think that it is going to set up just a really, really happy and wonderful year for him, and golf wise that could be anything; he could go on and win a couple more times this year for sure,” said Rose.