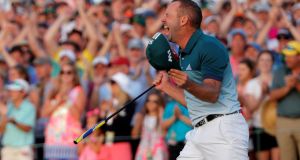 There are quite a few of you, we’d guess, who have been entering Irish Times Fantasy Golf competitions, in their various guises, for the past two decades and mournfully reached the conclusion that no matter how well you performed, victory would always remain beyond your grasp.

Sergio Garcia should, then, be an inspiration to you all as you embark on our 2017 Fantasy Golf journey, although it did take him 73 attempts before finally cracking the Major-winning code. None of you has been trying for that long, although it probably feels like it.

While Garcia picked up a cheque for $1.98 million at Augusta, our winner this year will be €10,000 the richer, the added prestige of being declared Fantasy Golf champion making the difference between the two prizes negligible. Our Justin Rose will collect €3,000 for finishing second, while our third-placed manager will win €2,000.

There are also five handsome monthly prizes to be won, the top scoring teams in the April 6th-30th, May 4th-28th, June 1st-July 2nd, July 6th-30th and August 3rd-13th periods earning themselves, respectively, fourballs at Corballis, Powerscourt, Fota Island, Killeen Castle and Elmgreen golf clubs – and just to show there is no end to our generosity, you’ll even have lunch while you’re there.

Niall Kavanagh is the Charley Hoffman of this year’s competition, sitting proudly atop our leaderboard after a sizzling opening round. Hoffman, of course, ended up tying for 22nd, so Niall will trust that his Hill Hoppers maintain their form and don’t suffer a similar fate as the American.

Need it be said, Garcia was the Hill Hoppers’ leading man, although it was Rory McIlroy who captained the team, thereby doubling his 420 points haul for his share of seventh place. Charl Schwartzel (third), Thomas Pieters (joint fourth) and Russell Henley (shared 11th) also contributed impressively to the team effort, making up for Ernie Els’ 53rd place finish and Hudson Swafford and Angel Cabrera’s missed cuts.

Just three managers topped the 3,000 points mark in week one, but while the other two, Brian Lee and John Cole, both had Garcia as captain, which earned them a dazzling 2,040 points, and also had Rose and McIlroy on board, they had a bunch of players who hadn’t even qualified for the Masters. But, with transfers in mind, that could well prove to be the wiser strategy in the longer run if those absentees have packed schedules in the weeks to come while the majority of the Masters’ top performers rest up.

Teams have one free transfer each week but you can receive two more by using the code that will appear in the paper every Tuesday and Wednesday. You then enter that code on the irishtimes.com/fantasygolf page, click the link and redeem your transfers. Remember, though, that you can’t carry transfers over from one week to another, any left over at the end of the week will be lost.

Just 18 weeks to go, then, with this week’s counting tournaments the RBC Heritage in South Carolina and the Trophee Hassan II in Morocco. Best of luck to you all, you’ll most probably need it.