Englishman, now twice a runner-up, remains convinced he can triumph at Augusta 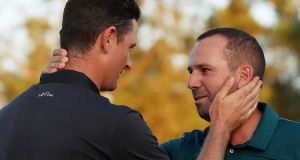 Justin Rose congratulates Sergio Garcia after the Spaniard’s victory on the first playoff hole in the final round of the Masters at Augusta National. Photograph: Rob Carr/Getty Images

The very second after Justin Rose hit his pitch on to the second green on Sunday the fans all around were startled by the rattle and thrum of a diesel engine.

Over the course of a week the sounds of Augusta National get to be pretty familiar, rat-a-tat woodpeckers and twittering cardinals, the swish, clack and thump of ball and club, the murmurs, sighs, roars and applause for the eagles and birdies that were and were not, perhaps the occasional passing siren.

That is pretty much it, until the final pair have played through. Because as soon as they pass the staff start dismantling their apparatus. The engine belonged to the cherrypicker carrying the camera over the fairway.

If anything at Augusta could ever be said to be done in a rush, it is the work to get the course back to its usual state, just as the members like it.

For Rose, the question now is whether he will be able to recover from the 2017 Masters as quickly, whether the damage done on Sunday will be as easy to repair as all those divots left in the fairways. Make no mistake, Rose felt he should have won.

“I would say this is one that slipped by,” he said after the final round. Rose hides his emotions but admitted: “It’s going to sting, for sure.”

When Rose reached the back nine he knew it was between him and Sergio García.

The two of them have been playing with and against each other since they were 14. When García faltered coming into Amen Corner, and made bogeys at the 10th and 11th, Rose thought he had his measure.

It was García’s par at the 13th that changed everything, Rose said.

García took a penalty drop after hitting his drive into the scrub but uncorked a brilliant wedge shot to six feet and made a tricky little putt to save par. Rose, right with his caddie, Mark Fulcher, missed a birdie from six feet.

“That little two-shot swing there was kind of when he was back in the tournament,” Rose said. “I feel like if he misses there, I’m four clear and I’ve got my eye on Thomas Pieters and Matt Kuchar instead.”

Given those two were four shots back and fast running out of holes, it was as good as won.

As García rallied, Rose began to crack under the intense pressure of those final few holes. They were small errors – a par putt at the 17th that drifted just wide of the cup; another, longer and right to left, on the 18th; and then that drive in the play-off, right into the trees – but they cost a lot.

“Could I have made the putt on 17? Of course I could,” Rose said, “but I’m not going to sit here and second guess one or two shots. I felt great. I felt in control. I felt positive. I felt confident. And, you know, barring a great comeback from Sergio it was mine to cruise to the house.”

It has been four years since Rose won his first Major, the US Open at Merion. He is too good a player to settle for one and knows it. He says he has five more years in his “prime” and is thinking about “how many he can pick off”.

He has finished as runner-up here at Augusta twice now. He followed Jordan Spieth home in 2015 when, as he has said, “many other years my score would have been good enough” to win.

Rose made all the right noises.

“I really feel like this is a tournament that I can go on and win,” he said, “I’d like to win three or four Green Jackets but one would be enough. I just want to win here.”

The worry is that it is all starting to get under his skin. It happens.

Schwartzel was talking about his friend Ernie Els, who just played what will likely be his last round in the Masters. Els also finished the runner-up here twice, in 2000 and 2004. He has admitted he never really recovered.

“I think that affected me quite a bit,” he said, “but, as I look back, to be in a battle like that for the Green Jacket, that’s a special moment in itself, whether you win or lose.”

Which sounded a little similar to Rose’s words.

“It’s nice to have been part of history. I would have liked to be the right part of it.”