Sarah Stirk: From pro tennis dreams to the face of Sky Sports Golf 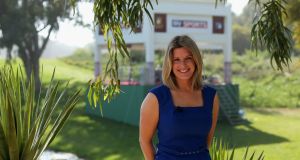 Fate has a way of tossing you a curve ball and, for Sarah Stirk, who’d grown up dreaming of life as a professional tennis player, an injury in her late-teens meant those aspirations of aces, lobs and rallies at Wimbledon, Roland Garros or wherever sent her down a different sporting route which has seen her become the face of golf at Sky Sports.

As the Welshwoman prepares to present next week’s live coverage of the Masters from a studio in London, rather than on-site from Augusta as would be the norm, with Covid-19’s impact forcing the adoption of different work practices, Stirk’s professionalism in her broadcasting role is accentuated by an excitement that the tournament, which “catches everyone’s imagination,” is going ahead: “There’s an appreciation in the world right now that life is very different . . . lockdowns are tough and, for a lot of people, there’s so much joy and anticipation for the Masters.”

Stirk is a self-confessed sports fanatic. Having attended the famed sports school Millfield in Somerset with designs on pursuing a tennis career, earning a scholarship to a university in Houston in the USA, injury prematurely ended such aspirations.

After a year Stateside, which necessitated daily physiotherapy and the realisation that her dream of becoming a tennis professional had ended before it ever got started, Stirk was drawn to sports journalism and studied at Loughborough University: “If I couldn’t play sport at the highest level, the next best thing for me was to be there in a journalism capacity. I love telling stories, love interviewing people, love getting the background stories as well as what happens on the course or pitch or field in that particular moment . . . I’m curious, love speaking and finding out what makes people tick, how they operate, how they get that moment in time. I love that side of it.

“I’ve been lucky to specialise in golf the last few years, it’s a big passion of mine. I have always been fascinated in the psychology of sport as well as seeing these top athletes, male, female, in whatever sport. How they get to where they are, the comebacks they have made or the challenges they have overcome. I am fascinated at how they perform at that level. Having played golf myself, the nerves and the tension, and how they handle that at the highest level still blows my mind.”

Stirk’s introduction to golf came through an uncle who moved to live at Gleneagles in Scotland and who she visited when in those parts as part of her university studies. “After tennis was over, it was nice to find something I could play. It’s addictive and it grabbed me and that was it. I was always very sporty. A lot of tennis players play golf, the coordination is really important for both,” said Stirk, whose lowest playing handicap was six, although the time to play as much as she would have liked was lessened for a time as she pursued her journalism and broadcasting career. (Ironically, she has managed to play more frequently this year, including an early-year round with Rich Beem out in Phoenix!).

That journalism career saw her work with Man Utd TV, with the BBC in England’s East Midlands and then London and also with Setanta Sports (in golf) before freelancing for the BBC, TalkSport and Sky Sports where a job opportunity, as Stirk put it, “presented itself.” In just under a decade, she has become an essential part of Sky’s golf coverage, although the impact of the coronavirus meant her last travel assignment was returning home from The Players back in March when it was cancelled after one round and her only on-site coverage this year came at the British Women’s Open.

That growth in coverage of women’s golf is close to her heart. “I always say it is a bit like a chicken and an egg, you need to show women’s golf to get the interest but need to know the interest is there to be able to show it. For me, a lot comes down to role models for young girls who need to see people they want to aspire to on the TV, in magazines and in newspapers and that means there is an interest there, (to inspire) a new generation of young stars.”

* Stirk will anchor Sky Sports’ coverage of the US Masters which takes place from November 12th-15th.