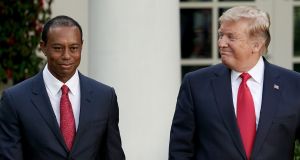 On Monday, October 12th, the number of American deaths from Coronavirus surpassed 212,000, unemployment closed in on eight per cent and food banks reported huge surges in numbers using their services. All over the country, families continued to struggle with the economic, emotional and mental toll of the past few months, with so many schools and colleges mired in the netherworld of remote learning. And, in the White House, Donald Trump took to his phone to address the compelling issue of the day - the NBA finals that just been won by his nemesis, LeBron James.

“Viewership for NBA Finals Finale Crash Nearly 70 per cent,” he tweeted along with an article outlining the diminished audience. “Beaten by Random Sunday Night Football Game. Maybe they were watching in China but I doubt it. Zero interest!”

In the middle of the worst public health crisis in a century, a challenge his administration has singularly failed to confront, the president, somehow, found time to throw shade at a professional sport. Unthinkable in any other era, now so much part of his quotidian nonsense it didn’t even merit significant headlines. What else would he be at on a Monday morning? This is what he does. This is who he is. No incumbent has ever spent more time name-calling athletes (almost always African-Americans for some inexplicable reason), feuding with entire leagues and trying to make national pastimes part of his inter-racial culture war.

To understand the outsized part sport plays in his infantilism, we must go back to last July when Dr Tony Fauci was invited to throw out the ceremonial first pitch at baseball’s season opener between the New York Yankees and the Washington Nationals. A timely acknowledgement of the physician’s work trying to convince naysayers like the president that the threat from the virus was real. One hour before Fauci took to the mound, Trump announced he was also going to be throwing out the first pitch at Yankee Stadium later in the summer. Turns out he hadn’t been invited to do so and never actually would. But, seeing sane America’s favourite doctor getting yet more accolades prompted him to fake award himself that very honour. A wannabe. He never was.

As in his dealings with anybody possessing hard-won qualifications or talent, childish envy and a deep-rooted insecurity underpin his attitude towards most athletes who won’t kowtow to him. He despises African-American NBA stars because, unlike the myth he has tried to peddle about himself, they are truly self-made, independent men. Most have emerged from the worst of socio-economic circumstances and overcame gargantuan obstacles to become super wealthy and admired the world over for their feats. Trump desperately wishes he could be as inspirational a brand as LeBron or Steph or KD. Or at least be liked by them.

The latter point is the reason he loves golfers, so many of whom have been so sycophantic to him, perhaps since they too live in a cossetted, country club world into which reality and minorities are rarely allowed to intrude. Exactly his kind of cloister. For every Peter Malnati, the lone PGA Tour journeyman who was willing to call him out for his disgraceful antics back in 2017, there is a long line, headed up by Tiger Woods, Rory Mcllroy, Dustin Johnson, Brooks Koepka, and Justin Thomas, who helped to legitimise his regime and to normalise his hate speech by teeing it up with him.

Mcllroy’s subsequent (and belated) about face on the issue was welcome but the stench of collaboration lingers. No matter what happens next Tuesday, photographs of the Holywood man gurning alongside Trump will endure, a reminder of the day he chose to be on the wrong side of history. Others decided differently. This has been a presidency hallmarked by dozens of teams and hundreds of athletes refusing the traditional national champions’ invitation to visit the White House, brave men and women from all codes who realised every photo-op lent credence to the vitriol Trump was spewing.

They knew, as all who are paying attention do, pleading ignorance will not be a viable defence when the reckoning comes. So, unlike their craven golfing brethren, they chose, sometimes at great cost, to take a moral stand against the man who picked a fight with Nascar, a sport where 70 per cent of fans identify as Trumpers, for belatedly entering the 21st century by banning the Confederate flag from racetracks.

They refused to associate with the charlatan who campaigned relentlessly to get college football teams (largely populated by unpaid, exploited African-Americans) back on the field this season because, regardless of health implications, he felt such games would help him sell voters his demented narrative that the country is returning to normality. In his distorted mind, it probably is too.

When he looked out on the audience during the presidential debate in Nashville last week, his fervent supporter John Daly was one of the few people allowed to sit in the arena. Hanging with Kid Rock, another faded relic from a bygone era, the two-time major champion was wearing a stars and stripes blazer and, of course, had to be asked by security to put his mask on.

“Beyond blessed to watch one of best @POTUS #Trump at #PresidentialDebates2020 with my boy @KidRock,” tweeted Daly. “TRUMP MTHA FUCKAS.”

As accurate a description of every athlete who willingly propped up this toxic presidency as any.

3 Brian Kerr: ‘The uncertainty, lack of support from the FAI, it was a dark time’