The Masters is unique, and this year more than ever

Graeme McDowell preparing for that Christmas Day feeling at Augusta 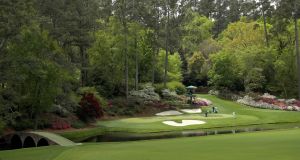 A general view of the 12th green at Augusta National during the final round of the 2018 Masters. Photograph: Patrick Smith/Getty Images

Jim Nantz, the polished sports broadcaster, came up with the phrase, “A tradition unlike any other”. The words were coined to set the Masters apart. Those at Augusta National Golf Club liked the wording so much, as it became an integral part of the tournament’s lexicon, that it was trademarked and found its way onto some of the merchandise and memorabilia of a Major unlike any other, the only one to return year-in and year-out to the same venue. Unique.

The traditional invitation for players to compete in the Masters arrives old school, by post. For those on the exclusive list, the cream card would drop into a player’s postbox, usually around Christmas time, its arrival timed to tie-in with the feelgood factor of the festive season. Unique.

Except, in this year unlike any other, the wait has gone on longer than anyone could have imagined: rather than an April slot in the calendar, as the first Major of the year, the Masters has found itself at the backend of the scheduling; and, with the British Open not taking place at all, as the third of the men’s Major championships.

Tiger Woods’s reign as champion has been extended by six months, and new kids – Collin Morikawa and Bryson DeChambeau – have laid claim to the two Majors, the PGA and the US Open, that took place behind-closed-doors. No crowds. Unique. A Masters unlike any other.

Yet, late in the year as it is, for those players who belatedly and finally get to drive in off Washington Road and down Magnolia Lane for this latest edition of the Masters, the tournament’s allure remains as strong as ever. Perhaps, in this year of years, even stronger, providing as it does an escape to a place unlike any other. Unique.

“It’s going to be a very unique week,” admitted Graeme McDowell. “It’s amazing the expanse of grass with nobody out there. It will have an eerie feeling to it. It’ll be interesting to see how the golf course is going to play of course. That’s the thing we’re all curious about.”

Indeed, the curiosity of it all is to do with more than the autumnal aesthetics or the set-up of the course. Since Covid-19 impacted, firstly causing the postponement of the tournament in its original run-up weeks, the game-changing antics of DeChambeau – bulked-up as he is – has brought with it its own sideshow with his approach unlike any other.

In expanding his gung-ho philosophy, DeChambeau teased he would likely go into “launch mode” on the seventh.

When Woods did something similar in overpowering the course in the late-90s, the reaction was to so-call Tiger-proof the course.

McDowell is a player who is on the opposite side of the power game. “I’m aware there is a power shift going on at a high level right now. It is exciting to see what these guys can do. Is there an inevitability of equipment going back? I think there is . . . it feels like there is an inevitability at some point but that probably won’t be for a couple of years.

“So, in the meantime, it’s going to be interesting to see how far these guys can actually hit the ball, and if Bryson goes and wins next week at Augusta, it will certainly be hugely, hugely interesting and I think quite healthy for the sport in a weird way. There’s definitely two schools of thought right now, where this is not okay and these guys are making a mockery of the best courses in the world and something has to be done; and there’s the flip side of the coin, where it’s very exciting.”

The power game is, quite simply, one part of the game. For those like McDowell, there is the challenge to find a different way to come out on top. As he put it, “I think, thankfully, there are still a lot of ways to get the job done. I mean, you look at a guy like Jim Furyk and his single-mindedness about sticking to what he does best. Have I been in the gym the last six months thinking about smashing at it about 185 miles per hour? Yeah, I have. But am I smart enough to know that I don’t want to do anything that’s going to jeopardise the rest of my game? Yes.”

He added: “I went down the road four or five years ago where I tried to hit it a little longer and I didn’t like the way it affected the rest of my game, so I’m doing it a slightly different way where it’s just part of my practice. Yes, I’m trying to drive it the best I can drive it but to a certain limit and, after that, I’ve just got to get better with the rest of my stuff.

“My game is built for being in the fairway, and great iron play, great wedge play and great putting. I’m not like Bryson or Phil or some of these guys, they want to move it as far as humanly possible and they don’t care if they miss the fairway. I need to be in the fairway and that’s just how my game’s built.”

McDowell is headed back to Augusta for the first time since 2016. He talks of a “fresh feeling” and of his “love/hate” relationship, but one more siding with love in its absence. “I’ve always been a little frustrated with Augusta because I’ve never really putted the best I can putt, so I’m going there with a fresh head and a fresh set of eyes and a sort of appreciative attitude . . . I feel like I’m 25 again going back to my first Masters, it’ll be like Christmas Day when I get out onto the golf course.”

A unique week, with no crowds, no ropes, no roars awaits! For one and all.