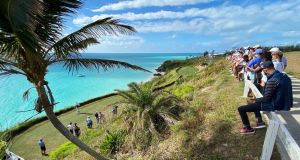 It’s a strange feeling walking through the empty concourse of the hulking Terminal 2 at Dublin airport listening to your heels clicking because of the silence that no people brings to such a vast space. It was scary coming back to the unknown of pandemic international travel a few months ago, now with the recent reinforced restrictions it is positively surreal.

I was heading to what I remember was paradise, Bermuda. So as I strode through security, where they genuinely looked happy to greet a lone customer, and on through the shuttered shops and down to the isolated wing for Transatlantic flights, it was difficult to conjure the image I had stored of my last visit to the island some 12 years previously, in very different circumstances. The airport experience was more akin to a dystopian trek through a communist terminal in Tashkent airport of the former Soviet Union than what we had - until March - enjoyed in the state of the art terminal in Dublin. Its seldom you feel lonely in a departure lounge.

We are extremely fortunate that the US PGA Tour has enabled a rather seamless experience for its players and caddies to enjoy travel and competition again on Tour. Naturally there are compromises, like frequent mask wearing, bi-weekly Covid testing, dining restrictions and travel complications. But of course humans do get used to most things and the way we move and live on tour is increasingly becoming normal. I do believe that everyone involved is grateful that we are playing golf in a safe environment and more amazingly, for the same purses that were on offer before Covid, unlike on the European Tour which has been financially decimated by the pandemic, with prize funds reflecting this.

So 39 other passengers and I crossed the Atlantic in a wide-bodied Airbus, again in eerie isolation, and I made my connection to the quaint and quirky old powder blue terminal at LF Wade International airport in Bermuda. Despite landing late, the pungent sultry tropical air embalmed me as I descended the steps of the aircraft, with the exotic sound of tree frogs croaking a welcome in the heavy night air. I immediately knew that I was somewhere different, somewhere special.

Given our new normal, the system in Bermuda works well and despite the inconvenience it is relatively painless

But times are indeed different. We weaved our way at a safe distance from each other, in serpentine fashion through the covered area outside the terminal in order to take a Covid test before we even got into the terminal proper. Every passenger who arrives in Bermuda needs to have a negative test result before they get an entry permit. Then they are tested on arrival and confined to their hotel room until they get another negative result response.

When you check in you are advised that your key only works one time and only when your negative result comes through are you given your key for the week. Given our new normal, the system in Bermuda works well and despite the inconvenience it is relatively painless.

On a tour where your trip to the golf course is inevitably made by road, uniquely our journey from the Hamilton Princess Hotel was made by sea. We had a 20 minute voyage to the course every day which sets a much more tranquil mood for the day than the frustrating vagaries a road trip can present. The temperature on deck was idyllic as we glided on the 38-metre catamaran, Warbaby Fox, through the placid waters of Hamilton Harbour towards the Port Royal golf course. The surroundings and gentle sway of the North Atlantic Ocean were a little confusing. Although we were not officially in the Caribbean it certainly didn’t feel or look like the North Atlantic. In some sand-based areas the sea is so clear and azure blue it is mesmerising.

So as we eased our way southwest to the course every day there was a very relaxed and affable air on deck. What a wonderful way to go to work. There is an order to the architecture on the mainland that reflects both individuality and harmony. Water harvesting is obligatory in Bermuda so the roof of each building is stepped and painted white. Rainfall gathers in a tank under the structure and hydrates houses through a filter system. It is extremely rare that households have to buy in any water, as nature normally provides.

The house colours are vivid but not gaudy, the structures modest and not ostentatious. With strong turquoise, powder blue, salmon and soft crimson amongst many other pleasing colours to the eye the houses are clearly visible but not craving attention. They say you can judge the strength of the economy by the freshness of the white painted roofs. A grey hew could spell a downturn.

With a minimal amount of Covid cases in the country and fewer than 10 deaths recorded, Bermuda has taken full advantage of its isolation and created a very safe environment for both residents and visitors. Given that the rest of the world seems to be shutting down again it sounds like a very beguiling refuge from both a European winter and lockdown situations. The British Overseas Territory is in fact trying to attract travellers to move to Bermuda for a year to work remotely.

One idyllic sandy cove gives way to another in a place that would appear in your dreams of what a paradise island should look like. Lest I get too effusive about the beauty and amenability of the place I have to admit that they are not giving anything away for free. But that, coupled with its scenic and tranquil nature are what makes Bermuda such a unique and pleasing place to visit.

From dystopia to utopia in a couple of flights the Bermuda Championship may not have had the strongest field or the biggest purse but it sure had an ambiance, allure and spectators which made up for any lack of star golfing attractions.