US Masters 2020: TV times and all you need to know 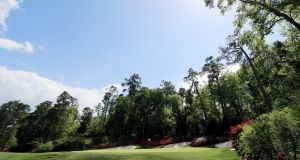 A view of the 13th hole at Augusta National. Photo: Mike Ehrmann/Getty Images

So, this is a bit strange, isn’t it, a Masters in November?

It’s a first, that’s for sure. The Masters tournament is normally played in April – although its first staging in 1934 was actually held in March! – and this is the first time the event takes place in November due, of course, to the impact of the Covid-19 pandemic which caused it to be postponed earlier in the year. It means that this year’s event will take place from November 12th to 15th.

A late-autumn Masters, can we expect temperatures to be much cooler?

Actually, the temperatures should be very similar if marginally cooler – in April, usual highs reach 24-25 degrees Celsius while this time of the year the high tends to be around 21 degrees Celsius. The big difference weather-wise is that the spring winds tend to come from the south, while winds later in the year come from the north which accounts for the drop in temperatures (and they tend to be stronger, which will likely be a factor for the players). And just like around April time, there is a threat of thunderstorms.

Why is play scheduled for earlier finishes?

Simple answer: there’s less sunlight at this time of the year, which explains why the tournament will feature two tee starts – off the 1st and the 10th – and, with daylight gone by 5.30pm local time (10.30pm Irish time), two hours earlier than springtime, it means earlier finishes than the April norm.

If you’re out and about The Irish Times liveblog is the place to keep up to date, kicking off around 1pm on Thursday and Friday and a little later at the weekend.

If you’re near a television, Sky Sports Golf will show featured group coverage from 12.30pm on Thursday and Friday with full coverage beginning at 6pm. On Saturday coverage also begins at 6pm on Sky Sports Golf while, on Sunday, you can tune in from 3pm.

What about the azaleas . . . will they be in bloom?

Augusta National has some 30 varieties of azalea on site and, while springtime is primetime, expect some colour from the famous flower. However, there will be a different, spectacular kind of colour from the autumnal leaves on the many different types of trees with the Japanese Maple expected to steal the limelight on the nature front.

No, to be short. Augusta National pioneered the use of the SubAir irrigation and all 18 greens use the technology which literally allows any excess water to be sucked into the underground system. The technology is such that each green has its own individual programme – depending on its location and size on the course – and is also capable of adjusting the underground temperature of the root zone. So, the greens will be as fast as ever, running 13-14 on the stimpmeter.

Why wasn’t the tournament held earlier, during the summer maybe?

Due to the excessive heat of the typical Georgia summer, that just wasn’t possible. Augusta National closes for play in late-May each year and the Bermuda grasses – on the fairways – turns brown due to the summer heat which allows the agronomists to overseed in September prior to the club reopening in mid-October.

Will there be any spectators at the tournament?

Unfortunately, no. Augusta National Golf Club took the decision to go ahead with the tournament without any “patrons” – as they call them – which has generally been the norm at tournaments since the PGA Tour resumed following its initial closure due to the Covid-19 pandemic. Those fortunate enough to obtain tickets for 2020 have been told those tickets will be good for next year’s staging, which is due to revert to its traditional April slot in the calendar.

And the field is different than it would have been in April?

Actually, no, it has been kept the same as it would have been in its original date: when the decision was made to postpone, it was with the caveat that those players exempt would remain so for the deferred tournament. Graeme McDowell, inside the world’s top-50 at the time, but who has since fallen outside, benefitted from that commitment. On the flip side, Daniel Berger, who wasn’t eligible at that cut-off on March 30th, and has since moved to number 13 in the world, didn’t get an invitation. There are 96 players in the field.