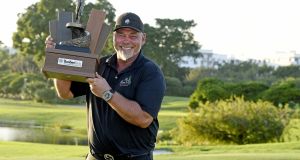 So, it’s not all about salt-water fly-fishing when he’s home in the Abacos in the northern Bahamas: Darren Clarke’s long-anticipated breakthrough win on the PGA Champions Tour, coming in the TimberTech Championship in Florida where he held off Jim Furyk and Bernhard Langer, showed the Northern Irishman has still got some golf game.

Clarke’s first win since his only Major success, in the 2011 British Open, was delivered in suitable style with a new set of TaylorMade clubs in his bag and tipping his cap to a new caddie, Sandy Armour, who has been only on his bag for three weeks.

Complications with the renewal of his US visa has meant Clarke can’t seek back-to-back wins in this week’s Champions Tour event in Phoenix, and instead he headed back to the paradise island that is his home these days with a cheque for $300,000 in his back pocket: “I would love to go and try and win again next week, but unfortunately that won’t be the case. I’m going to have to sit at the beach bar called Flippers down in Abaco Club, drink some sea breezes, watch the boys on the big screen up there.”

Of the recent tie-up with Armour, a brother of former tour player Tommy, Clarke said: “He’s been a huge benefit to me. He’s a great player himself, so he can see some of the flaws in my swing, which is many. So he’s helping me address some of those and help me with my putting. We’ve had three weeks and he’s getting to know me and that’s pretty difficult to do with my tantrums. At 52, sometimes I act as if I’m 12 or 13. It’s just getting to know your player, when to speak and not to speak, and how much. He’s adapted unbelievably quickly and he’s doing an amazing job.”

Clarke is finished his tournament play for the year but intends to get back into better physical shape for when he returns to the wraparound season in early 2021. As he put it, “I’ll have a week off. Then I’ve got another big programme. My weight fluctuates up and down, up and down and when I get a certain point, enough’s enough. So I’ve got my trainer and everything starts, so I’ll have a week’s bit of fun and then I’m back in the gym full time down there as well. I’m committed to do it so I just need to get myself back into decent shape again.”

Golf Ireland chief executive Mark Kennelly has welcomed the Irish government’s financial support of golf clubs, who have been hard hit financially and are currently closed to all play in the Republic due to Level 5 Covid-19 measures.

The sport’s governing body – under the forthcoming completion of the mergers of the GUI and the ILGU – has received two separate allocations of the Sport Ireland Resilience Fund, a sum of €2.7 million to support golf clubs across the Republic and a restart and renewal fund of €30,000 to create an educational portal to develop a range of online courses available to affiliated clubs, staff and PGA professionals.

“Irish golf welcomes the allocation of €2.7 million in funding which will support clubs that have been severely impacted by the Covid-19 pandemic . . . we will be working closely with Sport Ireland in the coming weeks to finalise the criteria for the club resilience fund and look forward to communicating this to clubs,” said Kennelly.

“I’ve really got to improve my wedge play” – Pádraig Harrington after some “erratic shots” with that club in hand saw him drop shots in the closing stretch of the Bermuda Championship, following a front nine 31 with a back nine 38 for a 69 and ultimately finishing in tied-26th.

Fred Funk showed his longevity by becoming just the fourth player in PGA Tour stats dating back to 1970 to make the cut at a regular tournament at age 64 or older, joining Sam Snead, Jack Nicklaus and Tom Watson in that elite club. Funk, who first played on the PGA Tour in 1982, was making his 650th career start when surviving the cut at the Bermuda Championship, which was won by Brian Gay, something of a whipper-snapper at the age of 48.

Happy 85th birthday. What an inspiration you are – Pádraig Harrington salutes the Black Knight himself, Gary Player, on his 85th birthday and his request for donations of $8.50 in his #golffightscancer fundraiser.

Happy 85 years young Mr Player! Such a great way to celebrate, let’s fight this together – Ian Poulter also getting behind Player’s appeal.

I’m sorry to have to withdraw from the @Bermuda_Champ due to an ankle problem. I hope to be back ASAP – Henrik Stenson on his injury withdrawal in Bermuda and placing a doubt over his availability for the Masters next week.

Dustin Johnson carried a three shot 54-hole lead into the final round of the HSBC Champions tournament in Shanghai, only to see it evaporate within two holes as Ian Poulter and then Graeme McDowell made a final day charge.

However, Johnson recovered and finished strongly – covering the final six holes in five under – for a 66 that gave him a 24-under-par winning total of 264, three clear of Poulter with G-Mac a shot further back in third. It gave Johnson a breakthrough WGC title.

“I knew they were going to come out swinging. I held them off and fortunately I played really well coming down the stretch . . . it was a good match from both of them, they put a lot of pressure on me but I’m really proud of myself and the way I handled it and the way I finished. This is probably my biggest win, with the field and the tournament, a World Golf Championship, and hopefully there’s better things to come.”

Q
In searching for her ball in long grass, Player A uses a sweeping motion with her feet back and forth hoping to step on the ball or move it to find it. Is this permissible?

A
Rule 7.4/2 – Player attempts to dislodge ball in tree or step on ball in tall grass during search – covers such a situation and, indeed, the player is allowed to use such a sweeping motion as a reasonable action. If a ball is accidentally moved when a player is trying to find or identify it, the ball must be replaced on the estimated spot without penalty.

5 Solskjaer angry at referees, other managers and Chelsea website

Liverpool break Ramsdale’s resistance at Bramall Lane 21:34
Solskjaer angry at referees, other managers and Chelsea website 21:24
Leinster punish Glasgow’s ill discipline with bonus point win 20:33
TV View: No need to feel sorry for England, but if it was any other team 20:15
New GAA president delivers on gender promise in first committees 19:34
Here is your handy guide to sport on television this week