Is Tiger Woods finally becoming loved by US golf fans? 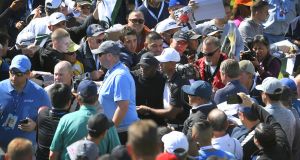 Tiger Woods signs autographs for fans as he leaves from the 18th green during the Pro-Am round for the Genesis Open at Riviera Country Club in Pacific Palisades, California. Photo: Stan Badz/PGA Tour

Tiger Woods seemed destined to be celebrated but not loved. If that appears harsh, the greatest golfer in a generation appeared perfectly at ease with that scenario himself. Until now.

Woods’s complex relationship with US galleries conjures gallows humour. A string of relationships, after all, were so damaging not only to Woods’s personal life but his broader reputation. Woods, already deliberately distant from fellow competitors, was apparently forever tarnished as tales of his extra-marital antics emerged. Phil Mickelson, the immaculate blue-eyed boy and long-time Woods rival, benefited in popularity terms.

The intervening years – now nine since the infamous Woods incident involving a fire hydrant – have seen moderate success, multiple surgeries and aborted comebacks following glimmers of promise. Woods’s struggles were met with joy on the basis he deserved every ounce of turmoil. More striking therefore than Woods’s performance in finishing 12th at the Honda Classic, an encouraging display in testing conditions after a fourth back operation, was the reaction towards him.

At 42, Woods has surely never had such support. A press release hailing a 20,000 Honda Classic attendance rise from 2017 – 225,000 visited this year – opened with the words: “Propelled by the return of Tiger Woods …” The tournament’s executive director, Kenneth Kennerly, added: “The energy level at the tournament was at an all-time high.” He wasn’t wrong.

That Woods has gleaned inspiration from a group of younger professionals – Rory McIlroy, Justin Thomas, Rickie Fowler et al – who took it upon themselves to keep their former idol in touch with the golf scene is well known. In the words of Jim Furyk, they have perhaps “prodded the bear” in respect of enhancing Woods’s desire to win, and win consistently, again. Less visible until Honda week was the extent to which crowds, who had once been fascinated by Woods without any obvious willingness to warm to him, now pull so strongly in his direction.

The numbers – to the tune of thousands – who followed Woods on Sunday gave at least the perception of 90% of those in attendance watching one group at the PGA Tour event. The shouts don’t become any sharper – “Make Sundays great again, Tiger” was a particular low – but the sentiment is obvious; these spectators want Woods to win, to the point where golf is verging on tribal territory. At times, Woods almost looked bashful about it all.

Woods, a Jupiter resident, offered a simple explanation. “This is where I live,” he said after completion of round four. “I’ve been in this community for a long time now. I’ve been a South Florida resident for a very long time. This is a hometown event for me.

“LA is where I grew up but I live here now, and these people recognise that. They see me around all the time. I’m just part of the community here. I’ve been here for a while.”

It does, however, seem a stretch to believe interaction at the local supermarket or ATM machine fuels vociferous backing for Woods.

The explanation is multi-faceted. When Woods sunk to his lowest ebb, his bloated face beamed across the world after an arrest for driving under the influence last May, sympathy was suddenly widespread. Woods, who projected a sense of infallibility, had never been a recipient of such feeling. By the time he returned to the competitive fold, it felt like onlookers had decided this individual had suffered enough for his earlier indiscretions.

There is also a sporting narrative. Just as a young breed of golf fans want to see what Tiger in his prime was really like, others rightly understand they could be bearing witness to arguably the finest sporting comeback story of all time should the 14-times major champion scale epic heights again. Golf doesn’t need Tiger Woods but there can be no doubt – commercially, if nothing else – the sport takes on a fresh identity and claims broader interest when he is part of the picture. Rightly or wrongly, that hasn’t actually altered in two decades.

The attitude of Woods himself plays a part. He routinely states that being pain free is key to his smiling, more open nature at golf events but it has looked for some time that he recognised a need to drop some shackles in a bid to enter a fresh professional chapter. Woods is more engaging with the media, which draws rueful smiles from an older generation who well remember his terse and at times needlessly guarded approach. By Woods’s own admission, his father was influential in that regard. Now, he displays a far more appealing side.

Woods exited PGA National with chants from young fans ringing in his ears. Whatever else the remainder of this fascinating career entails, he has succeeded in winning round America’s golfing public. – Guardian service