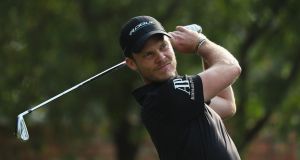 England’s Danny Willett playing a practice round ahead of the Tshwane Open at Pretoria Country Club in South Africa. Photograph: Warren Little/Getty Images

Former Masters champion Danny Willett faces a stark reminder of how far he has fallen in golf’s pecking order as he contests this week’s Tshwane Open in South Africa.

Willett was 12th in the WGC event – then sponsored by Cadillac and staged at Doral in Florida – in 2015 and third in 2016, just five weeks before winning his first Major title at Augusta National.

That took the 30-year-old Sheffielder to a career-high of ninth in the world, but he has since slipped to 210th due to injuries and a loss of form, and so far in 2018 has missed the cut in Dubai, Malaysia and Perth after withdrawing from his scheduled season opener in Abu Dhabi with a shoulder problem.

“Fully fit now, no niggles, no injuries, so really looking forward to playing a bit more and getting into the swing of things before the middle of the season starts,” Willett told European Tour Productions at Pretoria Country Club.

“I had to pull out of Nedbank [Golf Challenge] at the back end of last year because of my injury, so it’s always nice to come back down to SA. I kind of started my European Tour career down here with the SA Open seven or eight years ago.

“It’s always nice to come back and play. I’m pretty familiar with the grass down here and how the greens roll, so I’m looking forward to an exciting week.

“We’re working each day to try to make sure the body stays in good shape, and that we come out of each day feeling better than we started, instead of going backwards with everything.

“It’s okay hitting shots on the range but [it’s about] actually getting out on the course and having that tournament pressure and trying to hit shots that are needed to get to flags. I’m happy with how practice is going, and it’s just trying to get it more in play on the golf course.

“We didn’t make a cut in the Middle East and Malaysia, but that was more about getting the body ready and some rounds under our belt. We had a couple of weeks at home working hard, and hopefully now can kick on and really get things going forward in the right direction on the course.” – PA