Out of Bounds: Challenge Tour can be stepping stone to greatness

Back in 2012 Brooks Koepka took a punt on European Tour’s secondary circuit. . . 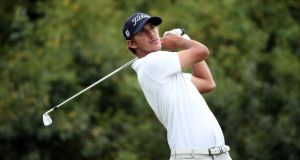 A young Brooks Koepka during the English Challenge in 2012. Photograph: Andrew Redington/Getty Images

Who knows? But maybe, just maybe, there’s another Brooks Koepka teeing up in the Northern Ireland Open at Galgorm Castle outside Ballymena over the coming days. For, yet again, we’re reminded that the Challenge Tour can be the stepping stone to greatness.

It was only back in 2012 that Koepka made the bold choice to take a punt on the European Tour’s secondary circuit, which involved a global odyssey, from using tuk-tuks in India to seemingly lifting trophies at will in 2013 when he won in turn in Spain (twice) and Italy. It meant that, by the time the NI Open was played that year, Koepka had already moved on to the main European Tour.

The point is that Koepka is the role model for all of those competing on the lovely parkland course at Galgorm Castle; he is the standout graduate of a development tour that, in fact, has now produced seven Major champions who, between them, have amassed 10 Majors: Michael Campbell, Trevor Immelman, Louis Oosthuizen, Martin Kaymer (2), Justin Rose, Henrik Stenson and Koepka (3).

Koepka, for sure, has moved to the highest level of all the graduates, with now three Majors to his name, and clearly has developed into an even stronger player than he was when cutting his teeth on the Challenge Tour.

Yet, as his caddie Ricky Elliott observed in the aftermath of his latest Major triumph in claiming the Wanamaker Trophy at the US PGA last Sunday of his man’s best attribute on the golf course, “I think [it’s] his focus. We do the same things at regular events [as at Majors]. I can’t put my finger on it, it’s an intangible thing. It’s something none of us can put a finger on it.”

That comment is interesting for what is left unsaid in a lot of ways, for it is the process – be it in golf or football, rugby or tennis – that ultimately delivers. And Koepka developed that game far removed from the brightest of lights; he did so on a Challenge Tour where he was the standout player to the extent that he was handed a full tour card before the secondary circuit had run its course in 2013, and he has continued to climb the ladder ever since.

The Northern Ireland Open – one of two in Ireland, with the Irish Challenge set for Concra Wood outside Castleblayney, Co Monaghan scheduled for October – has established itself as arguably the most successful tournament on the Challenge Tour, with the largest attendances year-on-year. More than 40,000 attended last year’s tournament.

And the news that next year’s tournament will actually be a double event, with the advent of the Northern Ireland Women’s Open on the LET to be played simultaneously utilising the nearby Massereene Golf Club, before both men’s and women’s tournaments conclude at Galgorm Castle, is another sign of visionary thinking.

For now, the Northern Ireland Open will for a last time be a standalone tournament . . . but playing a very important role in progressing careers for players seeking to emulate Koepka, Kaymer, Rose et al.