For the new Tiger Woods, second place is far from first loser

Brooks Koepka fought off an inspired challenge from Tiger Woods to win the PGA Championship on Sunday (August 12), giving the big-hitting American his second major title this season. Video: The Golf Channel 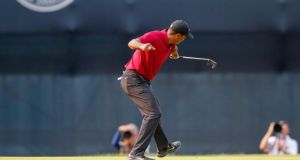 Tiger Woods reacts after making a birdie putt on the 18th green during the final round of the 100th PGA Championship golf tournament at Bellerive Country Club in St. Louis, Missouri. Photo: Erik S Lesser/EPA

For someone who detests losing, Tiger Woods – double fist-pumping the air as birdie putts dropped in the 100th US PGA Championship – was more than a little giddy with a runner-up finish. If anyone doubted his return, here was definitive proof of his comeback of comebacks: it’s been a long time since the final round of a Major championship was so raucous and, for that, Woods was the one who pushed all the buttons.

“It’s pretty apparent what a Tiger roar is versus anybody else,” admitted Justin Thomas, of how wild it got as Woods made a run at a 15th career Major title, his last coming at the 2008 US Open.

While Gary Woodland, paired alongside him, remarked: “It was awesome. In that atmosphere, there’s nothing like it, the energy in that place was unbelievable.”

Woods – fist-pumping, putter raised in that old trademark pose as the ball fell into the hole – was like his old self, which hardly seemed possible, even to himself, a year ago as he recovered from spinal fusion surgery. That was then, and this is now. Woods has almost certainly played his way into a Ryder Cup pick from USA captain Jim Furyk for next month’s match in Paris, and also raised expectations that, yes, he can win another Major.

“So I had to kind of figure this out on my own and it’s been really hard, it’s a lot harder than people think. And I’m just very pleased at what I’ve done so far and now to be part of the Ryder Cup conversation, going from where I’ve come from to now in the last year, it’s been pretty cool,” admitted Woods.

Wood’s final round 64 was the lowest finishing round of any Major he has played, this one a wild ride – he didn’t find a single fairway on his front nine – as he powers of recovery were more like one Houdini act followed by another. It gave him his best finish in a Major since his runner-up finish in the 2009 PGA to YE Yang at Hazeltine. But this was different, as he laid down a marker that he could yet again challenge Jack Nicklaus’s all-time record of 18 Major titles.

Woods was the one who inspired so many youngsters to take up the game when he was in his prime. “One of the reasons why you start playing the game. I started playing in the late ‘90s, early 2000s when Tiger was at his best. He has always been one of my heroes,” said Shane Lowry.

“He’s the greatest player to ever play the game, and to have the comeback that he’s having is incredible,” said Koepka.

Woods looks set to extend his golfing career, and to inspire more into the game.